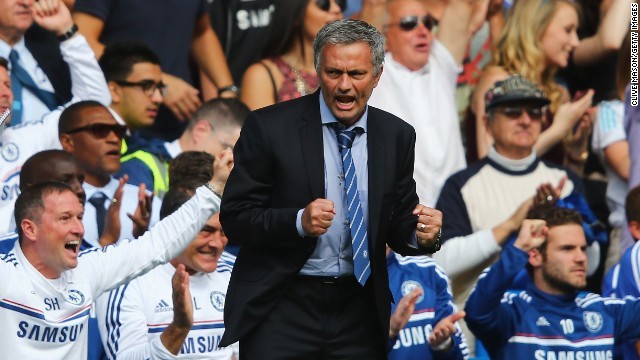 Chelsea manager Jose Mourinho has been given another reason to celebrate, after winning the Premier League Manager of the Year award earlier todat. The Portuguese has led his side to their first title in 5 years in convincing fashion, as the Blues have led the table right from the first week of the season. These gongs are awarded officially by the Premier League. This is the third time Mourinho has won this award, after having done so in the 2004/05 and 2005/06 seasons.

He beat off competition from Swansea’s Garry Monk, Southampton’s Ronald Koeman, Leicester City’s Nigel Pearson and Arsenal’s Arsene Wenger, who all had fantastic seasons as well.

Mourinho did not win a single Manager of the Month award throughout the campaign, despite his side being extremely consistent. In the process, he became the first league-winning manager to draw a blank in this category. But he didn’t seem to be too bothered with individual honours, as he said in an interview to Sky Sports that winning the Premier League was all that mattered to him.

He said, “It is, as you like to say in England, the icing on the cake, but the cake is more important than the icing.

“The cake is the Premier League, the cake is the objective of the manager, of the technical staff, of the squad, of the club, of the millions of supporters, and I work for the cake, I don’t work for this.

“If, at the top of the cake, I am the manager of the season, obviously I am very happy with that.”

Congratulations @hazardeden10 on winning the #BPL Player of the Season Award after a fantastic season for @ChelseaFC pic.twitter.com/Qs0XRkt1bT

Both Mourinho and Hazard will not dwell too much on these awards and will want to come out even stronger next season, as Chelsea look to retain their Premier League title.