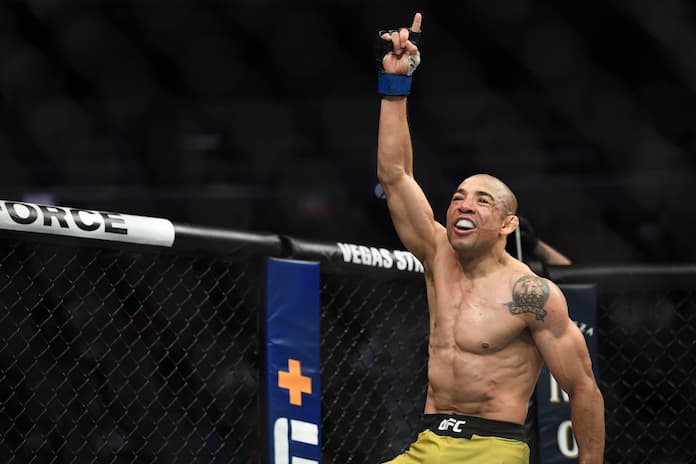 Former UFC Featherweight Champion and Hall of Famer, Jose Aldo, had left the door open to a return to professional fighting. The Brazilian MMA star has teased at a move over to boxing in the future, admitting he had always wanted to try his luck in the squared circle.

After hanging up his MMA gloves for good last month, former UFC Featherweight Champion Jose Aldo has hinted a return to fighting already. The 36-year-old has teased a move over from MMA to boxing.

After losing to Merab Dvalishvili in August, Jose Aldo announced his retirement from the sport of MMA. Aldo did have one fight left on his UFC contract, but decided to hang up the gloves after his most recent loss.

Aldo came into that fight fresh off the back of a three fight win streak. He beat Marlon Vera, Pedro Munhoz and then most recently Rob Font, before losing at UFC 278. In an interesting turn of events, the Brazilian hero has hinted that he could be tempted to get back into fight sports – this time in boxing.

Back in 2017, Aldo’s long-term coach, manager and friend – Andre Pederneiras – revealed that ‘Junior’ has wanted to box at some stage in his career for years and years. Aldo himself contemplated the move to boxing years ago, and may do just that next year.

The deal Aldo struck with the UFC was that he could make the jump across to boxing. However, the deal means he is prohibited from signing for another MMA promotion.

In a recent interview with Globo Esports, Aldo admitted he doesn’t know what his next move will be, but that he remains tempted at having a go at boxing.

“I’m trying to see the best path I’ll take right now. I won’t fight MMA, that’s for sure. I thank everybody calling me from other promotions, but I haven’t left the UFC, I remain under contract with them. I’ll see where I’ll fit,” said the UFC legend.

At 36-years-old, who knows what the next move will be for ‘Junior’. One thing is for sure, he  is one of the greatest mixed martial artists to ever grace the planet. What a career Jose Aldo has had so far. It just might not be done yet…