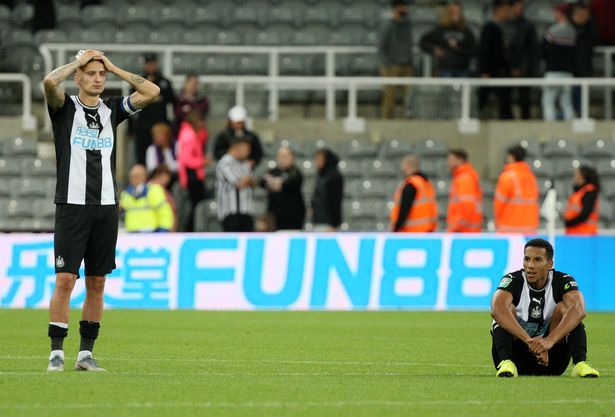 Newcastle crashed out of the League cup on penalties last night.

Jonjo Shelvey missed a crucial spot kick against Leicester City and the midfielder believes it ruined his team’s performance.

He apologised to the fans and revealed that he won’t be taking penalties anymore.

Speaking to the Chronicle after the game, he said: “I want to apologise to the fans for missing the penalty. It was a shocking penalty on my behalf. I won’t be taking them anymore. I just wanted to come out and apologise to the fans. I thought we deserved more from the game and we worked our socks off against a very good Leicester side. It was against a tough team but when I walked back from the shoot-out you want the ground to swallow you up. It ruined the performance we put in and it was horrible.”

Shelvey’s honest admission and apology will surely go down well with the supportive Newcastle fans.

The former Liverpool player is one of the best players at the club and the fans will be hoping that he can bounce back from this disappointment and deliver in the league games.

Shelvey could be a key player for Steve Bruce this season and it will be interesting to see how he reacts at the weekend.

Newcastle will need him in good spirits for their next game.

The Magpies will be disappointed to have crashed out of the competition so early but they cannot afford to dwell on it. They will have to move on quickly and prepare for their next league game.