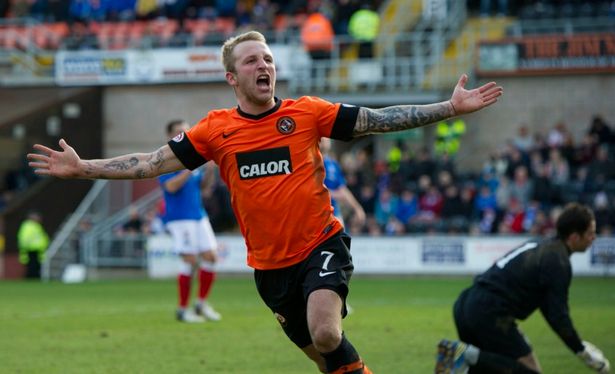 Johnny Russell has opened up about his failed transfer to Celtic a few years ago.

The former Dundee ace was linked with a move to Parkhead back in 2013 but the deal collapsed.

Russell has confirmed that he wanted to join Celtic but the two clubs couldn’t agree on a fee. He also revealed that he wasn’t the one who turned down the Scottish giants back then.

The boyhood Celtic fan was disappointed to have missed out on his dream move. He was a man in demand back then. Russell had just scored 20 goals for Dundee the previous season.

Speaking to Open Goal, he said: “People think I turned down Celtic but it never came to that. It was Celtic or Derby. I heard about it before I went on holiday but I thought I’d just go away, enjoy myself and see what happened. They both offered £500k but Dundee United said: ‘That’s not enough, we want more’. And then Derby came back in with £650k. At the time I wanted to go Celtic, my preference was to go to Celtic. And so I’ve asked: ‘What’s happening with Celtic?’. My agent was speaking to me saying: ‘Derby have offered more and United have accepted it, what do you want to do?’. I still wanted Celtic to come to the table but they wouldn’t budge, they wouldn’t go over £500k. I was gutted. I know it’s a lot of money but it was £150k on top (of what they’d already offered).”

Derby County went on to sign the former Scotland international in the end.

The Championship side agreed to match Dundee’s asking price for the striker. Celtic were only willing to pay around £500k for his services.