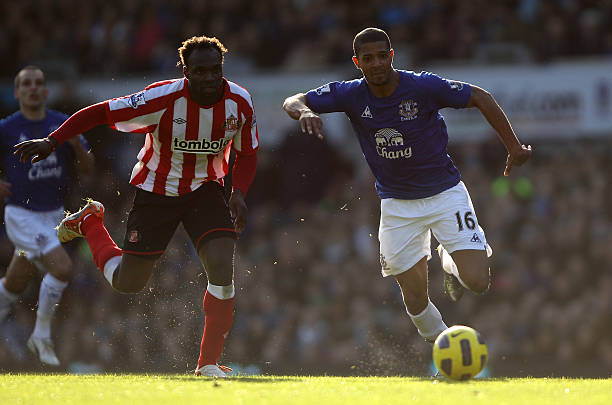 Only two teams have scored just one Premier League goal in 2019-20 – Watford and Everton.

It’s a poor return for a side looking to break into the top-six, and manager Marco Silva has to do more with two of his sources of goals on the training pitch.

Toffees playmaker Gylfi Sigurdsson and striker Dominic Calvert-Lewin have failed to link-up as expected and required this season so far, exchanging just six passes between each other in the opening three games of the new campaign.

Everton have won just once – versus Watford, drawing against Crystal Palace and losing to Aston Villa, and Sigurdsson and DCL must do more if the team are to improve in front of goal.

Former Everton striker Jermaine Beckford believes the lack of understanding between the two could be down to Silva’s style of attacking through the full-backs, though.

“If they’ve been working on it all week out on the training ground and then Sigurddson is only passing to Calvert-Lewin three times in a game that’s worrying,” the former Goodison Park fan favourite told The Athletic after the Villa loss.

“However you look at it that figure stands out as low. But it may be they’ve been told to play through the wide channels. Looking at Everton it seems that way.

“The goals can’t just come from the strikers either, though. Other players have to share the load and last season Sigurdsson did that really well with his contribution. They’ve brought in Alex Iwobi from Arsenal now, who is a brilliant acquisition and is all about getting on the front foot and taking it to the opposition. It might just take time for him and Moise Kean, who also looks impressive, to bed in.”

Calvert-Lewin isn’t expected to lead Everton’s attack for the rest of the campaign, with Kean likely to force his way into Silva’s starting XI soon.

Nevertheless, the Portuguese boss must explore other options of scoring apart from mainly playing through the wide channels.

The Toffees only goal has come from the left-sided players, with Lucas Digne assisting Bernard against Watford.

Sigurdsson has to be able to create plenty goalscoring chances for the strikers regularly, and Everton have to be more clinical in front of goal.

If they are to have a chance of playing in Europe next season, they have to score more, and the earlier Silva comes up with the much-needed tactics, the better.