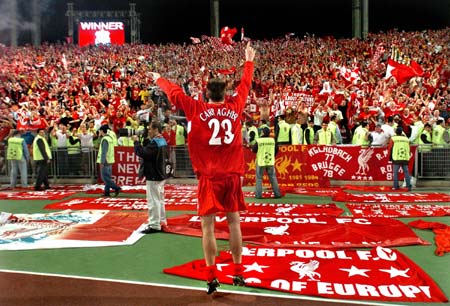 Everton host Liverpool at Goodison Park on Sunday, and after losing the reverse fixture at Anfield at the death, the Toffees will be seeking sweet revenge this time out.

A win or even draw for the hosts will deal a blow on the Reds’ title aspirations should Manchester City secure a win against Bournemouth, and the Merseyside derby could play a huge role in the Premier League race this term.

Former Liverpool defender Jamie Carragher has been rooting for Jurgen Klopp’s side all-campaign, but he has joked that he will be sitting on the fence on Sunday having grown up as a passionate Everton fan.

The Liverpool legend cheered Everton on as a youngster as they ended a 15-year wait to win the league title in 1985, but he switched allegiances after moving to the Reds’ Academy three years later.

Carragher made his Liverpool debut in 1996, making 737 appearances across all competitions before hanging the boot in 2013.

The 41-year-old, who was named Liverpool Player of the Year thrice won two FA Cups, three League Cups, the UEFA Champions League, the Europa League and two UEFA Super Cups with the Anfield giants, with the Premier League title the only trophy that eluded him at club level.

The Reds will further strengthen their title charge with victory at Goodison Park, and after yesterday’s 5-0 demolition of Watford, the players will be full of confidence ahead of the clash.

Carragher too would be, but it’s really hard to see him not getting delighted with a Liverpool win.