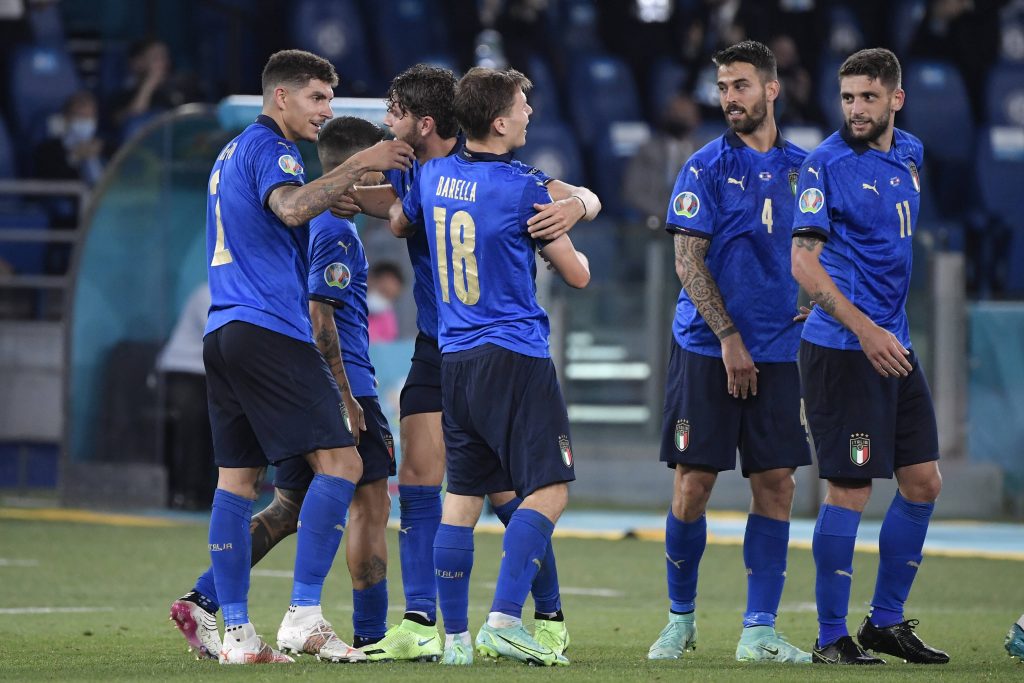 Italy continued their near-perfect start to Euro 2020 with a wonderful performance and win against Switzerland on Wednesday.

The hosts dominated the first half, and thought they’d made a breakthrough when Giorgio Chiellini bundled home from Lorenzo Insigne’s corner.

However, VAR ruled the goal out after replays showed that the ball struck Chiellini’s hand. This was his last contribution of the game, as he was substituted with an injury shortly afterwards.

But it was not long before Italy took the lead with a wonderful goal. Manuel Locatelli played an excellent pass out to Domenico Berardi, who drove into the box and squared back to Locatelli for a tap in.

Roberto Mancini’s men continued to control the first half, and they almost got a second when Leonardo Spinazzola was played through by Insigne, but the full-back could only poke wide.

It was a difficult first half for Switzerland, who would have been relieved to go in at the break only 1-0 down. They struggled to get a grip on the game, and had just one attempt in the opening 45.

Things didn’t get better for the Swiss after half time, and it was only a matter of time before Italy got themselves a second.

It was Locatelli again who found the net, this time with a beautiful strike into the bottom corner from outside the box.

Switzerland began to edge forward after going two down, but still failed to get a goal back, coming closest when substitute Steven Zuber had an effort blocked by the legs of Gianluigi Donnarumma.

But it was looking far more likely that Italy would get the next goal. Berardi fired over from inside the box, and Ciro Immobile twice missed the target after being played through on goal by Leonardo Bonucci and Federico Chiesa.

In the closing moments of the match, Immobile managed to get his goal. Rafael Toloi won the ball in the middle of the pitch and found the Lazio forward, who struck from distance into the bottom corner.

The 3-0 victory made it six points from two for Italy, who become the first team to qualify for the knockout rounds. They face Wales next time, knowing that a draw will secure top spot.

Switzerland will almost certainly need a win in their final game against Turkey to progress to the round of 16.

Gianluigi Donnarumma (6/10) – Only called upon once, making a decent save from Zuber.

Leonardo Bonucci (8/10) – Didn’t let anything past him. Passing out from the back was very good too.

Giorgio Chiellini (6/10) – Had a scrappy goal ruled out. Substituted after 24 minutes with an injury.

Leonardo Spinazzola (7/10) – Another impressive display by the full-back, who always looked like an attacking threat.

Jorginho (8/10) – Composed in the middle, helping Italy in possession. Another good showing.

Manuel Locatelli (9/10) *MOTM* – Earned a standing ovation with a stellar performance. Brilliant on the ball, energetic, and got himself two wonderful goals.

Domenico Berardi (8/10) – Provided a lot of threat from the wing. Brilliant work for the opening goal.

Franco Acerbi (7/10) – Filled in admirably for Chiellini, not looking a foot out of place.

Yann Sommer (5/10) – Could do little about either of Locatelli’s goals, but will have been disappointed to allow Immobile’s in.

Kevin Mbabu (5/10) – Did little going forward and struggled against the duo of Insigne and Spinazzola.

Nico Elvedi (6/10) – Not much he could have done about any of the goals, but found things tricky after Switzerland went to a back four.

Fabian Schar (6/10) – Did enough to protect the Swiss goal while under relentless pressure. Substituted on 58 minutes.

Ricardo Rodriguez (5/10) – Given a tough night up against Berardi, who skinned him for the opener.

Remo Freuler (5/10) – Got completely overrun in midfield by Italy’s brilliant trio in the middle of the park.

Granit Xhaka (5/10) – Much like Freuler, stood no chance up against Italy’s midfield. One has to question the decision to play just two in midfield.

Xherdan Shaqiri (5/10) – Anonymous in the first half. Had a couple of moments after the break, but still unable to unlock the door.

Breel Embolo (4/10) – Hardly got on the ball and did nothing when he had it. A disappointing follow up to an excellent first game.

Haris Seferovic (5/10) – Given no service. Subbed off at half time.