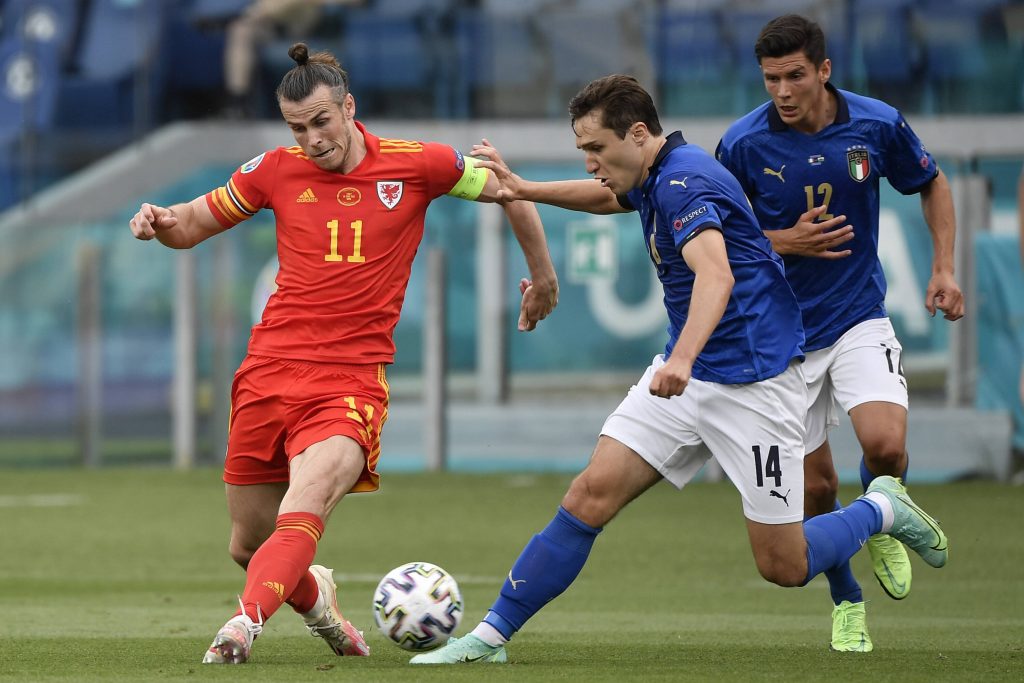 Wales secured their progression to the Euro 2020 last 16 despite defeat to Italy in Rome, with the Azzurri making it an impressive three wins from three in Group A.

Rob Page and his men headed into their showdown with Italy at the Stadio Olimpico knowing a point would be enough to confirm their place in the next round.

Italy had already guaranteed their progression but knew a defeat would have to be avoided to ensure they finished table toppers of Group A.

Despite manager Roberto Mancini making eight changes to his starting XI, Italy were immediately on the front foot and fired an early warning sign 12 minutes in.

Alessandro Bastoni strode forward and curled a dangerous ball into the Wales penalty area, but the outstretched Andrea Belotti could not keep his effort on target.

Goalkeeper Danny Ward was equal to two long-distance drives from Emerson Palmieri, and Matteo Pessina inside the opening 20 before Wales registered their first real effort on goal just under the half-hour mark.

Daniel James’ near-post corner was met by Chris Gunter, but his header clipped the side netting and went behind for a goal kick.

The Azzurri continued to dominate, and Chiesa again threatened to open the scoring, as his fierce shot across goal whistled past the post with Ward scrambling.

With just over five minutes to go before halftime, Italy finally made the breakthrough.

Marco Verratti picked himself up after being clattered to the ground by Joe Allen to curl in a near-post freekick, which Pessina reacted fastest to, with his delicate touch guiding the ball past the helpless Ward.

Verratti, making his first footballing appearance since going off injured in the Champions League semi-final, continued to dictate play as he sent in a sumptuous ball into the box, which Pessina could not make significant contact with.

Wales headed into the break grateful only to be a goal down and, with the news Switzerland were just a two-goal swing away from levelling the goal difference between the two sides, a big second half awaited.

It was almost the worse possible start to the second half for the Dragons, as Bernardeschi sent a free-kick crashing against the base of the post, as Wales continued to ride their luck.

With 54 minutes on the clock, Aaron Ramsey spurned a great opportunity to draw his side level.

The Juventus man worked his way into the penalty area. After a failed clearance from Italy’s defence, the 30-year-old could not seize the opportunity with Gianluigi Donnarumma off his line in a flash to close down the angle.

Just a minute later and Wales were left with a mountain to climb, as referee Ovidiu Hategan showed Ethan Ampadu a straight red card for a late stamp on Bernardeschi’s ankle.

Ward once more kept his side in the game as he reacted smartly to turn Belotti’s close-range effort out for a corner after brilliant work from the dynamic Chiesa down the left flank.

As the game entered the final 15, Gareth Bale spurned his second big chance in two games with the goal at his mercy.

Ramsey curled a dangerous freekick into the box, and after the ball had been nodded down to the unmarked Bale, 12-yards out on his favoured left foot, the Real Madrid player could only volley a wild effort over the crossbar.

With news that Switzerland were now leading 3-1, Welsh fans were left sweating on whether their captain’s miss would prove costly.

Italy continued to press, and the lively Belotti fired a fierce effort down the throat of Ward in the final minute of normal time.

The 91st minute bought a heart-in-mouth moment for the Welsh nation as substitute Bryan Cristante’s deflected effort forced Ward into a fine sprawling save.

However, a resilient Wales who played the majority of the second-half with ten men, held on to book their round-of-16 tie next Saturday against the runners-up of Group C at 5.00 pm.

Italy, Euro 2020’s standout performers so far, will play the runners-up of Group C on the same day at Wembley at 8.00 pm.

Gianluigi Donnarumma (6/10) – Quiet game for the 22-year-old. Remained alert to smother a real chance for Ramsey in the second half.

Rafael Toloi (6/10) – The Atalanta full-back put in a solid display, nullifying any threat down his right flank.

Leonardo Bonucci (6/10) – A typically disciplined display from the veteran kept Wales attack at bay for the 45 minutes he was on the pitch.

Alessandro Bastoni (7/10) – The youngster continues to play with an impressive degree of maturity and composure. Likely to be a key part of the Azzurri back four for the knock-out stages.

Emerson Palmieri (6/10) – A disciplined performance from the Chelsea man, posing as a threat going forward. However, unlikely to retain his spot over Leonardo Spinazzola for the Italians last-16 showdown.

Matteo Pessina (7/10) – The 24-year-old looked assured next to experienced midfield duo Verratti and Jorginho – took his goal brilliantly with a deft touch.

Jorginho (7/10) – Comfortable on the ball and threatened Wales with a series of defence splitting passes. Critical to the pace of the Azzurri side.

Marco Verratti (8/10)*MOTM* – Hard to believe the PSG star has not played a competitive game in over a month. Assured on the ball, consistently causing Wales problems with his vision and creativity. Brilliant freekick for his side’s goal. A man of the match performance and looks set to add a vital dimension to Azzurri’s midfield for the remainder of the tournament.

Federico Chiesa (7/10) – Constantly caused Neco Williams problems down the left-hand side with dangerous balls into the box and his sharp movement. Offers Italy a very credible alternative in attack.

Andrea Belotti (6/10) – A lively performance from the Torino man with clever movement and good hold up play. Unlucky to not get on the scoresheet with a few close efforts.

Federico Bernardeschi (8/10) – Very bright performance for a player who sat on the bench for Italy’s first two group games. Constantly causing Wales defence problems and unlucky not to get on the scoresheet with a fierce freekick early in the second half.

Francesco Acerbi (6/10) – A solid second-half performance from the Lazio man, adapted to the pace of the game quickly and played a key role in maintaining Italy’s third consecutive clean sheet of the tournament.

Danny Ward (8/10) – Another impressive performance from Wales number one, hard to believe he has not played a minute of Premier League football this season. Big stops throughout, especially to deny Cristante late on. Arguable Wales’ best player of the group stage.

Connor Roberts (6/10) – Struggled to venture further forward due to Italy’s tight defending but put in a solid defensive display and kept the threat down his flank to a reasonable level.

Chris Gunter (7/10) – Struggled with the brisk movement of Italy’s forwards but came close with a header in the first half. A battling display when his side were reduced to ten men.

Joe Rodon (8/10) – Led by example at the back for Wales, crucial headed clearances and blocks throughout. Played a key role in keeping the score at 1-0.

Ethan Ampadu (5/10) – A solid first half from the 20-year-old in an unsettled defence. However, his challenge was clumsy and reckless that led to his dismissal. Left his side with a difficult last half an hour of the contest.

Neco Williams (6/10) – A busy night for the Liverpool youngster dealing with the threat of Chiesa. The 20-year-old dug in and played a key role in keeping Italy at bay.

Joe Morrell (5/10) – Struggled with Italy’s pace and was unable to assert himself in the middle of the park. Lost possession too frequently and was replaced with half an hour to play.

Joe Allen (7/10) – Arguably Wale’s best midfielder, struggled with the experience of Jorghino and Verratti but worked tirelessly when Ampadu was sent off.

Aaron Ramsey (6/10) – Unable to impact the game as he did against Turkey, however operating as a false nine did him no favours. Playing from deep in the knockout stages will bring the best out of the experienced playmaker.

Gareth Bale (6/10) – The Wales captain missed a massive chance to draw his side level. However, led by example with his work rate and always poses a threat. Italy set up to crowd him out, and when his side went a man down, it made it even more difficult for him to express himself on the game.

Daniel James (6/10) – Not as lively and direct as in the first two group games. Italy defence kept him largely at arm’s length, and the Manchester United man will be hoping to atone for an underwhelming performance in the round of 16.