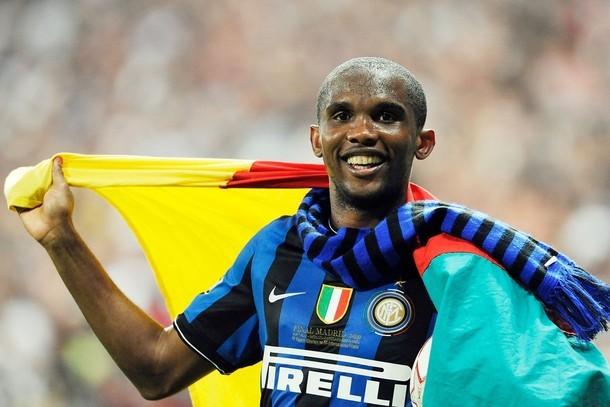 Samuel Eto’o is a marvelled genius who could write his own text book on how to be one of the most accomplished and gifted strikers of his generation.  His attributes and ability have backed up his success as he is undisputedly Africa’s most decorated footballer – but does this make him the continents greatest ever player?

Everyone will have their own opinion on just who is. Africa has produced some wonderful talent in the last thirty years and they continue to do so with a domino effect as more and more raw talent continue’s to blossom into genuine world class stars.

They were heavily represented in the last two FIFA World Cups with the Ivory Coast and Ghana possessing team’s that could rival some of Europe and South America’s elite.

The likes of George Weah, Didier Drogba and Abedi Pele have all soared to superstardom back in their native home’s as well as having the people of Europe all starry eyed and amazed at what they could/can do with a ball at their feet.

Samuel Eto’o however has the honour of being his continent’s most decorated player. His honours list is astounding:

And this doesn’t even represent his total haul which also includes a number of Spanish and Italian cups.

His CV is as glittering and spectacular as you can get. The Cameroonian has been named African player of the year three times, is a Pichichi winner (La Liga top scorer), been given umpteen awards via UEFA and became his country’s highest ever goal scorer.

To put it into context of just how stunning Eto’o’s achievements are, he won back to back trebles with Barcelona and Internazionale (2009, 2010). Neither nation, Spain or Italy, had produced a treble winner prior to 2009 and Eto’o was a part of the inaugural bow for both in the space of a year. That well and truly deserves a huge amount of adulation!

For a man to come out of Africa and not only succeed in Europe, but dominate it is so conclusively is truly admirable.

His honours have been accompanied with his undoubted ability and prowess. He hasn’t been someone who has sat back whilst his team mates done all the work to earn these accolades, he has been an integral figure whether it has been at Barcelona or Internazionale – Samuel Eto’o has been at the forefront of the success for both clubs.

He is a winner and a champion who thrives on the big stage and drools over the possibility of adding another piece of silverware to his haul. He wants to be the best at what he does and prove to the world just how spectacular he is. Also a charming man who does suffer from the odd lapse in his temperament but as the old saying goes – there is an element of madness to all geniuses.

To think the Inter man is still only 29 years of age – possibly another five years ahead of him playing at the highest level.  Who’s going to doubt him winning another half a dozen titles and championships? His CV at present is up there with some of the greatest of all time – he could so easily add to it by the time he hangs up his boots.

One title that has eluded him is the honour of being named FIFA World Player of the Year. He came close in 2005 when he came in at third placed behind Frank Lampard. Had it not been for a certain Ronaldinho who was in his prime and playing some of the most outstanding football the world has ever seen, then Eto’o may very well have grabbed the prize – amazing  to think that both played in the same team back in Catalonia.

The Inter ace is Africa’s finest export in terms of success. Is he the continents greatest ever player? Everyone will have their own views but nobody can argue that Samuel Eto’o doesn’t deserve to be mentioned in such high esteem.

The ‘black panther’ can certainly look back on his career with a vast amount of pride when he decides to call it a day – thankfully that will not be anytime soon.

Samuel Eto’o back to what he knows best – scoring goals!