The New Year is on Thursday and also it is the day when officially the January transfer window opens. Few clubs are expected to be busy and one of them could be Chelsea, but like what they did in summer, the Blues could conduct their business early this time as well.

If the reports are to be believed, Chelsea are closing in on signing Croatian winger Andrej Kramaric. The 23-year-old’s agent will undergo a meeting with Chelsea, where the Blues are expected to lodge a formal bid.

However, Kramaric’s agent are not the only one that are scheduled to held talks with Chelsea officials. According to reports from the reliable David Amoyal, staff of Gianluca di Marzio working team, agent of Chelsea winger Mohamed Salah will meet with Chelsea to secure a 18-months loan move to Inter Milan. 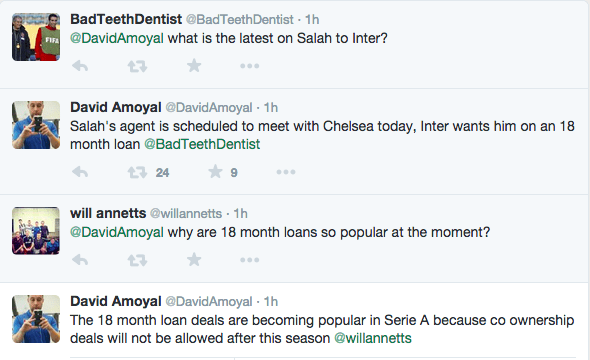 The Serie A giants are keen to bolster the squad in order to finish the season in a strong position, but Roberto Mancini may have to content with loan signings only.

The deal is beneficial for all parties. Although Jose Mourinho would have liked to have Salah as a squad player, but he cannot guarantee him regular football. The Egyptian winger has only managed 12 minutes of action this season, and desperately needs game under his belt.