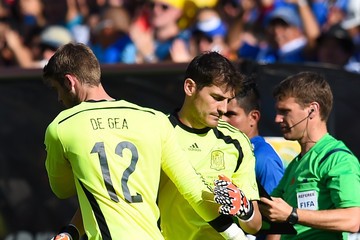 Real Madrid’s sponsors ‘bwin’ have confirmed today via their Twitter account that Iker Casillas will leave the club in the summer and join Porto. This has, unsurprisingly, re-fuelled speculations of Manchester United’s goalkeeper David De Gea’s move to the Spanish capital to replace the Spanish legend.

The above roughly translates to: “Iker Casillas is going to Porto. On Friday at 13:00 hours, the Real Madrid captain will bid farewell to the Bernabeu.”

This will end a glittering 25-year career for the 34 year-old with Madrid, during which he won 5 La Liga titles, 2 Spanish Cups and 3 UEFA Champions Leagues. He has also served as the captain for the Spanish national side since 2008, and has won 2 European Championships and one World Cup with the La Furia Roja. The De Gea transfer story has had its fair share of twists and turns over the last few days, with the latest story being United’s refusal to sell their star man unless Madrid let Sergio Ramos join them in return.

De Gea was United’s best player by a country mile last season, and is therefore valued highly by Louis van Gaal. While the Red Devils have made it clear that they will not go down without a fight, the lure of playing for arguably the biggest club in the world is bound to catch up with the 24 year-old. Moreover, the prospect of replacing Casillas will make the opportunity seem even more enticing. Madrid did buy Keylor Navas last summer, after the Costa Rican’s impressive showing at the World Cup in Brazil, but he was unable to break into the first team in the league ahead of the veteran Casillas. New manager Rafael Benitez is believed to want a keeper more experienced at the top level to replace the outgoing legend.

According to this report by the Telegraph, Madrid could also look at Tottenham Hotspur’s Hugo Lloris. The Frenchman has been on United’s radar as a possible replacement for De Gea, along with Ajax’s Jasper Cillessen and Stoke City’s Asmir Begovic, even though the latter looks more likely to move to champions Chelsea.