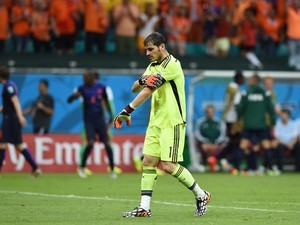 The Real Madrid side since the turn of the millenium has seen multiple changes. Big-name managers and players have come and gone, and the glory days have vacillated too. The same can be said for the Spanish national side as well. After being the biggest under-achievers in international football, they became the best side in the world at the end of the last decade.

Amidst all this though, there has been one constant: Iker Casillas.

An epitome of consistency and durability, Casillas has been an ever-present in both these sides since the early 2000’s. Awarded the captaincy in both teams a few years ago, the goalkeeper has been a role model for every player in his country. His unerringly effective displays week-in, week-out cemented his place as one of the best goalkeeper in the history of the game. As captain, his honours include a World Cup and two European Championships along with the La Liga title, two Spanish Cups and the Champions League with Real Madrid.

Over the last couple of years though, things have changed. It all started in the 2011-12 season, when then Real manager Jose Mourinho made the decision to drop Casillas and play Diego Lopez instead. The Spanish number 1 may not have been in the best form, but the decision to bench him still left everyone in shock. Since then, he struggled to get into his club side and his performances with Spain also became patchy.

The normally dependable shot-stopper was suddenly extremely error-prone, and it almost vindicated Mourinho’s decision. After lifting the 2010 World Cup as captain, he had a terrible tournament earlier this year in Brazil, and was one of the major reasons for Spain’s first-round exit.

On Thursday night, in his 158th international cap away at Slovakia, he was culpable once again for a Spanish defeat. In a game that the Lu Furia Roja seemed to be in complete control of, a howler from Casillas gifted the hosts the opening goal. He misjudged a 30 year free-kick coming straight at him from Juraj Kucka, diving to his right and conceding a goal. This changed the whole scheme of things and even though Spain levelled things through Paco Alcacer, a late goal from Miroslav Stoch settled the European Championships Qualifier.

Changing of The Guard Required:

In a poll conducted by Spanish newspaper Marca following the Slovakia game, an overwhelmingly 86 per cent of the people felt that Manchester United’s David De Gea should be given an opportunity ahead of Casillas. The 23 year-old has been in outstanding form this season, and was single-handedly responsible for his side’s win over Everton last Sunday.

Although Casillas is much-loved by the Spanish supporters, the latter realise that the time has come for the legendary goalkeeper to step aside and pass the baton on to a more deserving candidate. Over to you, Mr. Del Bosque.