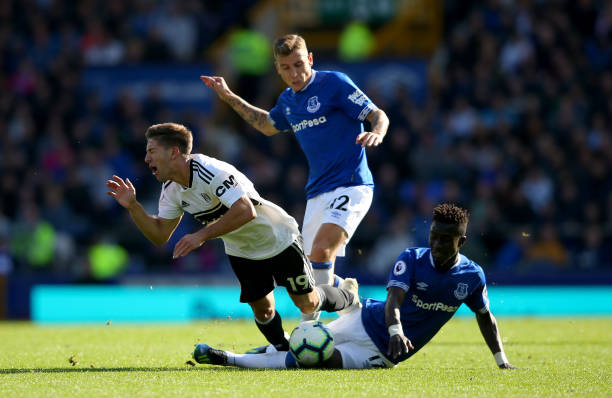 Everton booked their place in the third round of the League Cup following a 4-2 victory against Lincoln City on Wednesday night.

The League One side shocked the visitors by opening the scoring 20 seconds into the game following a mix-up between Djibril Sidibe and Morgan Schniederlin.

However, French left-back Lucas Digne drew his side level with a well-taken free-kick nine minutes from the break.

Everton appeared to have gotten the winner when Gylfi Sigurdsson scored from the spot on the hour mark, but the hosts hit back 10 minutes later.

It took late headers from Alex Iwobi and Richarlison for the Toffees to book their place in the next round, and one of their former players was keeping an eye on the game.

Paris Saint-Germain midfielder Idrissa Gueye sent this message to the players on Twitter after the game, and Digne’s goal particularly caught his eyes:

The Senegalese international left Goodison Park this summer for Parc des Princes after three seasons and 108 games for the Toffees.

Gueye has featured once for PSG since his £30 million move, and has since been replaced with Jean-Philippe Gbamin.

The former Mainz 05 defensive midfielder is currently out of action after picking up an injury during training last week, and he could be set to spend almost two months on the treatment table.