India
Home News how liverpool have improved under brendan rodgers

Liverpool’s 3-0 victory at Old Trafford against arch rivals Manchester United have put them back firmly in the Premier League title race, even though Brendan Rodgers continues to play down his team’s chances.

It felt like a North West shift towards Liverpool as they wrestled United into submission last weekend, and with only nine games left to play, Rodgers’ side are four points behind Chelsea (with a game in hand). With the Blues yet to arrive at Anfield, Red hearts can dare to dream again. 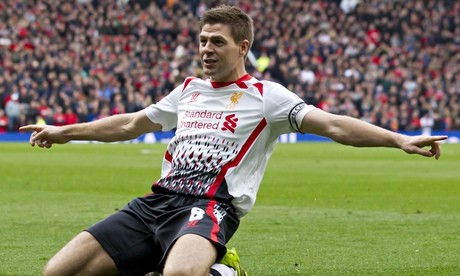 And hats off to the architect of this Red-Revolution; the man who has redefined the word ‘progress’. The one who, through his intricate plans of redevelopment, has proved that proper management can do wonders in football, and who has brought a new lease of life to the sacred footballing temple that is Anfield. Brendan Rodgers, take a bow.

It is indeed a revolution. Rodgers has transformed his team and his players through his sheer tactical acumen and brilliant man management skills, and here’s why:

It was a gamble taken by the Liverpool owners to appoint a manager, who had just one year of football experience at the highest level. Rodgers did a wonderful job with Swansea, where his possession-based football was loosely compared with the tiki-taka style of Barcelona. Initially, at Liverpool, he was intent was continuing with the same philosophy which he terms as “death by football.”

People could see that Liverpool were trying a different approach, although at the time results were not showing the level of progress everyone expected.

Rodgers is not only a versatile and flexible manager but he has that great strength to admit his mistakes and learn from it. He understood that merely implementing the system won’t be enough at his new club, but to make it work properly, he needs to find a way to play according to the strength of his players as well.

The difference in approach is there for all us to see. It’s not like Liverpool cannot play possession football or that Rodgers’ ideology has been completely abandoned, but he has been able to blend it in a way that is now effective. It is “conquest by counter” rather than relentless emphasis on possession as Rodgers said Liverpool being “at their most dangerous when they don’t have the ball”. It is free flowing, eye catching, entertaining at the same time effective.

By taking a cavalier sort of approach, attack has become the central weapon for the Reds, often eclipsing the defensive frailties at the back.

One cannot help but admire the tactical flexibility he has shown this season. Liverpool do not boast a strong squad like Chelsea or Manchester City, therefore opponents can have a fair idea about the probable starting line-up but, not how they will line-up.

Rodgers has shown great appetite for tinkering with tactics. When Luis Suarez was absent for the opening five matches, Rodgers relied on a 4-2-3-1 formation, with Sturridge operating as a lone striker. Though Liverpool were far from being convincing, the system worked as they managed 10 points from opening 4 games.

When the Uruguayan came back from suspension, Rodgers found a solution to accommodate both his top strikers in a 3-5-2 formation (3-4-1-2 variation). However, the system had to be abandoned, after Sturridge fell injured in late November.

Rodgers could have easily reverted to 4-2-3-1 with Suarez up front but he came up with a flexible 4-3-3 formation that saw Liverpool playing some scintillating football, admired throughout the country. Suarez was scoring for fun while the system got the best out of young Raheem Sterling, who had not started a league match until December.

When Sturridge returned from injury, Rodgers continued with the 4-3-3 formation, with Suarez and Sterling operating on the flanks.

Flexibility shown in learning from past mistakes

Liverpool suffered their only league defeat at home this season, at the hands of Southampton. The Reds had no answer to the high pressing football of the Saints as the midfield was run ragged at Anfield.

Rodgers found a way to counter the problem in the corresponding fixture and introduced a diamond system. Southampton were tactically out-foxed as the Reds emerged victorious by 3-0.

While Southampton enjoyed a lion-share of possession in that match, they’re restricted to only two shots on target. Liverpool simply soaked up the pressure and hit them hard on the counter attack, with the introduction of Sterling for Coutinho changing the complexion of the game, just when the home side was looking to stretch the game.

Improvement in other areas

Under Rodgers, Liverpool have improved in converting chances from set pieces this season while has shown the hunger and desire to grind out results (against Fulham and Swansea) when things didn’t pan out exactly how they wanted.

Further, Rodgers has transformed Gerrard into a deep lying maker and has got the best out of him this season. Gerrard is undoubtedly one of the best midfielders England has ever produced, but his lack of tactical discipline has earned criticisms from time to time. Under Rodgers, the England skipper has shown tremendous improvement in positional discipline.

Also the metamorphosis of Coutinho is equally crucial in Liverpool’s development. The brilliant wide attacker is now the “creative heart beat” of the team. He is not only a ball player, but at the same time a ball winner as well, as Tony Barrett notes, he wins the ball “often high up the pitch, and that alone has allowed Rodgers to restore equilibrium to his midfield.”

Players like Jordan Henderson, Jon Flanagan and Martin Skrtel, who at one point of time were deemed surplus to requirements, have become key cogs in the well drilled machine of Rodgers.

Barrett notes that credit should go to the manager (along with the player of course) for creating an environment where players at Liverpool know that “if they train and play well the chances are that they will be in the side.”

Every manager make mistakes and Rodgers is of no exception. But, the key is to learn from it and try not to repeat again. Rodgers has done exactly that during his short tenure at the club. In his case, he not only learns, but learns quickly. He has shown the willingness to adapt and act accordingly. He doesn’t just get the support of his players and the fans, but he is adored, respected and loved as well.