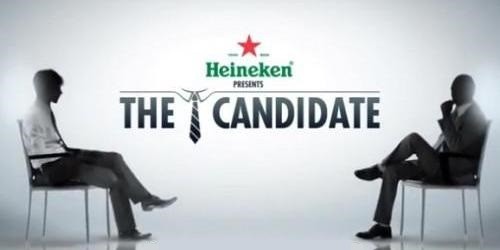 In preparation of the Champions League final on the May 25th, 2013, Heineken needed to hire an intern for its Event & Sponsorship Marketing team to accompany the coveted trophy as it tours the world prior to arriving at Wembley Stadium.

For this once-in-a-lifetime opportunity, Heineken should have followed a very strict hiring policy and selected the man who can handle such a responsibility. Instead, the Netherlands-based beer manufacturer decided to take an unconventional route.

Rather than asking questions about hypothetical business situations, they decided to test their applicants’ skills, confidence and resourcefulness.

Heineken received a staggering 1,734 applications for the position. A shortlist of 25 applicants was compiled and they were invited to Amsterdam for their big interview – while secretly filming the process.

The behind-the-scenes video demonstrates the resourcefulness of the young job-seekers as they were made to respond to unusual circumstances. First up, the boss got up-close and personal with them and held their hands and soon after the boss ‘collapsed’ and the interviewees had no option but to try and revive their boss.

Finally, a fire-alarm sounded and on their way out, they were forced to help and rescue a stranded Heineken employee from the roof. How the candidates responded to these incidents determind who had the skills needed to work in the Heineken marketing department.

The result is: The Candidate!

The job is a 10-week internship in Heineken’s Event & Sponsorship Marketing team. The position was open to any graduate wanting to gain experience working with the world’s leading premium beer brand.

The winner of the ‘The Candidate’ is Guy Luchting. He is from Germany and he is studying Hospitality Management in the Netherlands. The candidates came from all over the world, from countries such as Hungary, Singapore, France, Spain, Russia, and the Caribbean.

Luchting, whose internship with Heineken is started on 12th February, 2013, said about his interview:

“I really didn’t know what was happening at the job interview.

“First they take my hand and I think ‘Hey, that’s friendly’ and then the guy falls on the floor and next thing I am outside during a fire alarm helping somebody jump off the roof.

“It was insane. But it really is my dream job.”

This is post has been sponsored by Heineken. You can check out more on offer from the Champions League’s official sponsor on their YouTube channel, on their Facebook page and by following them on Twitter.