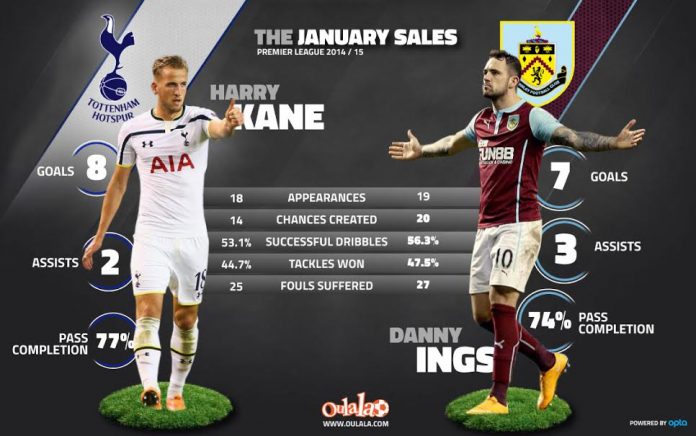 Tottenham are reportedly ready to offer £5m for Burnley striker Danny Ings. Other clubs monitoring the situation are said to be Southampton following Shane Long’s injury in the FA Cup this weekend as well as Chelsea and Manchester City who are both looking to increase their quota of homegrown players.

Despite being offered new contract terms by the Clarets, Ings has preferred to keep his options open in his final season at Turf Moor. The 22-year-old’s contract expires in the summer and would cost a new club £3m in compensation at that stage, thus, in essence, making his actual transfer value only £2m during the current January transfer window.

In terms of performance against price that is as unbalanced as it gets.

Our friends at Opta powered fantasy football game www.oulala.com have had a closer look at the cut-price player that Tottenham could be landing and it would surely prove to be bargain of the century.

After comparing Ings to flavour of the month Harry Kane, the stats prove just how good a season the Burnley striker is enjoying. With just a year separating the pair and both Internationals at under-21 level for England, they’re at a very similar stage of their careers.

Ings has appeared just once more than Kane in the Premier League this season however the stats are remarkably even. The Tottenham man has scored one more goal and has a slightly better pass completion percentage than Ings. That’s where it stops. The Burnley forward leads Kane for assists, chances created, has completed a higher percentage of dribbles, has won more tackles and has also provoked more fouls than his potential new strike partner.

With Kane having recently signed a new £35,000 a week contract keeping him at Tottenham until 2020, bagging Danny Ings to partner him would see the North London club secure two of the country’s very best attacking talents.

Beating the likes of Chelsea and Manchester City to Ing’s signature could well be Daniel Levy’s biggest coup yet.