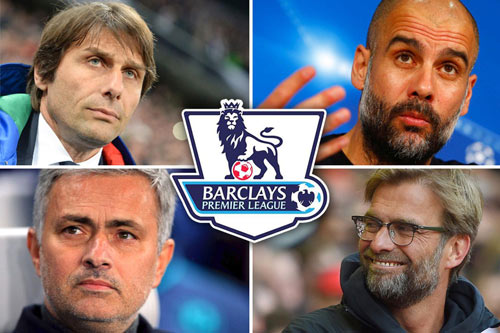 The English Premier League has, this season, been dubbed the battle of the superpowers.  Not on the pitch, however, but on the sidelines.  Back in August 2016, the season started with fans’ mouths watering at the prospect of seeing some of world football’s best minds intellectually battle it out, using England’s biggest clubs as pawns in their game.

In the summer break alone, Antonio Conte arrived at Chelsea, Pep Guardiola at Man City and Jose Mourinho at Manchester United.  They joined a lineup of Premier League managers that already included the much-lauded Jurgen Klopp at Liverpool and stalwart Arsene Wenger at Arsenal.  With such embarrassment of riches in dugouts across England, combined with the excitement around young managers such as Mauricio Pochettino and Eddie Howe, there was near-hysteria amongst fans and media alike at what this could mean for the title race that lay ahead.

So far, the battle hasn’t disappointed.  Drama and tension have reigned in a season that has seen the supposed ‘big teams’ regain a stronghold on the league that was so memorably hijacked by Claudio Ranieri’s Leicester City in 2015/16.  At the time of writing, Conte’s Chelsea maintain a vice-like grip on first place, 10 points ahead of both Tottenham and Arsenal in second and third, with Liverpool, Man City and Manchester United not far behind.  If people thought these fresh new faces would take the Premier League by storm, the story so far suggests they weren’t wrong.

But there has been an interesting development in the discussion around the calibre of managers in the Premier League that has extended beyond England’s shores.  With confusion abound regarding Arsene Wenger’s future at Arsenal, speculation has been rife about who could replace him at the Emirates.  The Frenchman’s 20-year association with the Gunners could end in summer 2017, with his contract expiring and Wenger himself refusing to give any assurances he’s likely to stay on in North London.

Who could replace the man who currently holds the record as the longest-serving current manager with a single club in the English football league?  Wenger’s impact on the game has been widely praised and, in particular, his ability to change Arsenal from a club with an inherent booze and party culture to one where athleticism and professionalism was king.  His focus was on novel training methods and he did more to change the external influences on players and their game than, perhaps, anyone else in Premier League history.  Wenger focused heavily on diet, with the famed Mars Bar incident only serving to illustrate the way in which he operated from day one at the club.

“I changed a few habits of the players, which isn’t easy in a team with an average age of 30 years – at the first match the players were chanting, ‘We want our Mars bars!'” Wenger recalled. “At half-time, I asked my physio Gary Lewin, ‘Nobody is talking, what’s wrong with them?’ He replied, ‘They’re hungry.’ I hadn’t given them their chocolate before the game. It was funny.”

The idea that a man so revolutionary in terms of English football may have to be replaced has, for some reason, left many spectators baffled.  There is a pervading attitude that, combined with the fact the Premier League have a perceived monopoly on world football’s best managing talent, there are few capable of replacing Wenger in charge at Arsenal.  Few fans of English football seem able to look beyond their own domestic leagues for inspiration or are able to see the array of talent that lies beyond their shores, both in management and in other areas of the game.

Thomas Tuchel, the young and invigorating German who succeeded Klopp at Borussia Dortmund, is bookmakers’ favourite to take the helm at Arsenal and yet, still, appreciation for him seems less forthcoming in Britain, in general, than it might be had he already managed in England.  He, and so many other managers of his kind, are almost immediately expected to be without the necessary qualities to manage in England. “Yeah, but could he do it in the Premier League?” they say, citing the supposedly desirable qualities of pace and power in the English game as reasons why his ‘foreign ways’ may never work.  Indeed, the Premier League is home to a man who, around this time last year, faced the same accusations.  Despite arguably being one of the most successful and innovative coaches of his generation, the afore-mentioned Guardiola was somewhat sneered at by corners of the British press.  “His greatest challenge in the Premier League may well be embracing the lack of control,” wrote The Guardian’s Barney Ronay in September 2016, “the random elements, where the moment is often decided on luck, muscle, adrenal inspiration.”.  His considerable achievements at both FC Barcelona and, later, FC Bayern were downplayed.  Commentators attempted to invalidate his methods, claiming that the considerable talent he had at his disposal in terms of playing staff meant that he’d had it easy and that it wouldn’t wash on a wet Tuesday night in Stoke.  Yes, Pep has had his struggles at the Etihad this season, but there’s no doubt the tides are turning in Manchester.  Guardiola may yet prove his previous triumphs were no fluke and that, even in England, novel and new thinking can overcome brute force and strength.

There are myriad other managerial talents across the footballing world who appear, at large, to be being ignored when discussing who could take over from Wenger.  Take Massimiliano Allegri at Juventus.  Despite only just over a decade in management, he already has three Serie A titles and two Coppa Italias, as well as one appearance in a Champions League final appearance in 2015.  His appointment at Juve followed a four-year spell at Milan in which he won their last top-flight title and, in his current home of Turin, he has operated a seamless transfer of power from previous manager Antonio Conte.  He has maintained the Bianconeri’s dominance in Italy, as the club continues its return to power following the infamous Calciopoli scandal.

Off the more well-trodden footballing paths, there is yet more talent lurking.  Talents like Viktor Goncharenko, the young Belarusian coach who helped make BATE Borisov the first club to represent his home nation’s history.  Or Julian Nagelsmann, the German prodigy who, at just 29 years old, has already found his way to the helm of Bundesliga club 1899 Hoffenheim.  With already nearly a decade of coaching experience under his blet, Nagelsmann is changing the face of coaching in his homeland, at a time in his life when most others in the game would only just be reaching the peak of their powers as a player.

The notion that Tuchel, Allegri, Goncharenko or any of the numerous other managing talents in mainland Europe and beyond couldn’t deploy their ideas in England is, frankly, laughable.  Football is football.  Whether it’s played in Birmingham or Barcelona, Reading or Rome, novel and fresh approaches to football will always benefit the leagues on which they are imparted.  England is no different, and neither should it be considered so.