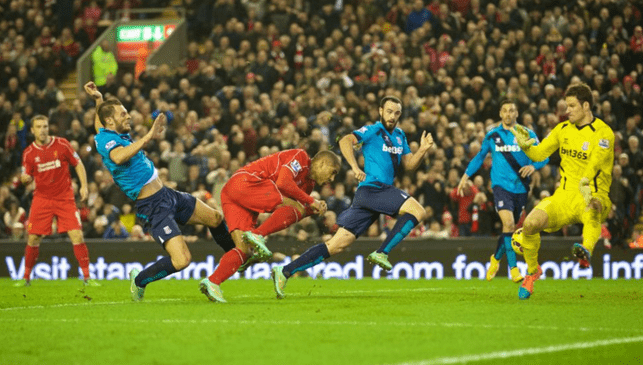 Glen Johnson has openly stated that he hasn’t been offered a new Liverpool contract, even though his present agreement expires at the end of the season.

The 30-year-old right-back is therefore to open negotiations with any foreign club in January, but that seem to have not alarmed Liverpool, who are quite relaxed to let one of the club’s highest earner leave for nothing at the end of present campaign.

Johnson has stated time and again his desire to stay at Anfield, but with no offers on the table, he acknowledges that he might have to move elsewhere where his qualities are prized. He reflected on his future, via Andy Hunter of The Guardian:

“First and foremost I want to play for a club that wants me. “It is as simple as that. I have seen stuff in the press that I have been offered half the money I am on. That’s not true. I haven’t been offered anything. We are not speaking [about a contract] at the moment.

“I have enjoyed the majority of my six years here but if I haven’t got a contract, I can’t stay. It does play on your mind but that is when you have to be professional and do your best for the team.”

However, Johnson admits he has no intention of “crawling” before Liverpool hierarchy to secure a new deal. He has not discussed about his future with the Reds manager Brendan Rodgers, nor he wishes to do so.

He added, via Tony Barrett of The Times: “I’m not going to go crawling to anybody. They know where I am and they know the situation. There were minor talks at the end of last season but they were minor talks, nothing that I could accept or reject, just minor talks.”

Johnson grabbed the headline this week for his match-winning performance against Stoke City on Saturday. The England international scored the only goal of the match, when he bravely marched on to the box and stooped to head in, after Rickie Lambert’s header hit the post.

He got injured in the process; Liverpool club’s doctor, Zafar Iqbal, ran on to the pitch to insert staples into the gaping wound quickly.

“It hurts a lot less when the ball hits the net, that’s for sure. We fought hard from the beginning and I would have been very upset if we had only drawn the game. We have given ourselves a platform to build from now. We have just got to stay together as a squad, as we have been doing.”

It was his first goal for Liverpool since October 2012, and certainly deserves praise for the effort, but it hardly masks his overall vulnerability at the back.

He has attracted fierce criticism this season from the Liverpool supporters for his one-after-another poor performances and how Rodgers still picks him regularly is baffling to almost everyone.

Rodgers, however, is left with limited options, as Jon Flanagan is still out injured while Andre Wisdom is plying trade with West Brom on loan this season. Javier Manquillo, the young right-back on loan from Atletico Madrid, has already made a handful of appearances, but the Reds manager tend to rely on Johnson for his valuable experience.

Leaving aside that goal, Johnson’s overall performance against Stoke City, much like the previous two, was disappointing to say the least. He fails to provide enough security at the back, while his habit of losing possession/ dispossessed by opposition forwards puts the team into pressing panic button every now and then.

As you can see in the video, he lost the ball in a dangerous area, when all he needed to do (he had all the time on earth to pick the right pass) was to pick up some Red shirt and play a simple pass or even put the ball away for safety.

While going forward, his natural tendency to cut-back inside and shoot had led to few goals no doubt (three goals & eight assists in the past three seasons) but most of the time it leads to opposition counter-attack against Liverpool.

Steven Gerrard, the Liverpool captain, is also facing the same contract wrangle, but FSG and Rodgers are more than happy to hand him a contract extension shortly. But that cannot be said of Johnson, who is likely to be phrased out, once Flanagan returns from injury.

So, what next for the Liverpool defender? According to the reliable Chris Bascombe of The Telegraph, Roma are keen to sign him, with the Serie A giants willing to match his £120,000 a week salary.

A move to Roma would be beneficial for Johnson as well. The slow-paced nature of the Serie A is not physically demanding and would suit his game, but most importantly, he would be able to represent a club that are doing exceedingly well in their domestic league and in Europe.

Tony Barrett also adds in his article that several Liverpool players are yet to reach agreement with the club over a new contract, however, negotiations are under way with Jordan Henderson, Raheem Sterling, Philippe Coutinho and Jon Flanagan.

Johnson should be praised for his valiant effort in earning three points for Liverpool against Stoke City, but he may not find easy to keep hold of his place once Flanagan returns. He probably doesn’t feature in the long term plans of Rodgers and it seems likely his time at Anfield is as good as over.