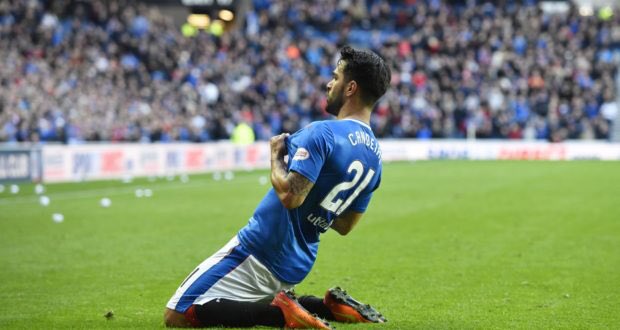 Glasgow Rangers winger Daniel Candeias has signed a new two and a half year deal with the Ibrox club, according to reports from the Scottish Sun.

The 30-year-old winger joined the Gers last summer for a fee in the region of £700,000. He has been one of the top performers at the Glasgow club, and has been a fan favourite as well.

The Portuguese forward has been in fine form this season, and now has decided to extend his stay at Rangers till 2020.

The report claims that Rangers have not only decided to extend his stay but have given him a pay increase as well.

He has made 36 appearances in all competitions for the Gers this season. He is undoubtedly one of the main creative forces for the side, having scored six goals and further laying off nine for others.

Since Graeme Murty took charge at the club, Rangers have given contract extensions to several players – Alfredo Morelos, Josh Windass and James Tavernier – and Candeias is the latest line to get rewarded for his efforts.

Rangers fans took to social networking site Twitter to express their reaction and judging by their tweets they are extremely happy with the news.

Player of the year at rangers been a great signing

Deserves his new contract been superb for us always gives 100%

Well deserved if the case. Outstanding contribution so far this season ?

Great news. Great player with massive work ethic. Been a pleasure watching him.