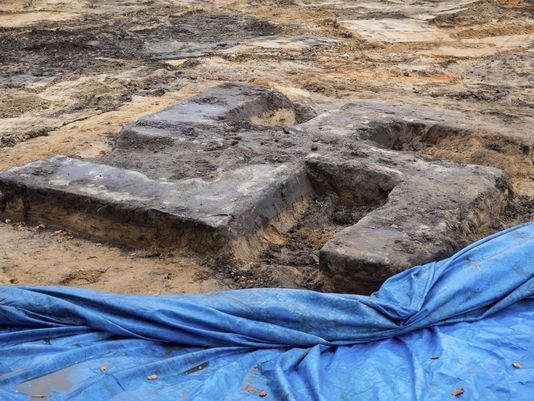 A routine construction work in Germany has unearthed a Nazi era swastika symbol buried under a football ground.

Local builders were digging into the ground in the Hein Kling sports stadium in Hamburg’s Billstedt district when they discovered the concrete swastika, measuring at four by four metres (13 by 13 feet), buried 16 inches below the surface of the pitch. Members of the Billstedt-Horn sports club based at the Hein Kling stadium claimed that the swastika served as a foundation for a Nazi era monument that once stood at the site of the stadium. The monument was destroyed and torn down decades ago, added the members.

Hamburg’s city officials and its cultural heritage department have called for the immediate removal of the structure. However, it is too heavy for the excavators to lift it out of the stadium. Instead, the construction workers will break it down piece by piece with jackhammers before disposing off the debris.

The swastika, an ancient religious symbol from the Indian subcontinent, was bastardized by the Nazis as an emblem for ‘Aryan identity’. As a result, despite its deeply spiritual symbolism, the icon has been stigmatized in the West. Germany has a zero tolerance policy on icons associated with the Nazis.