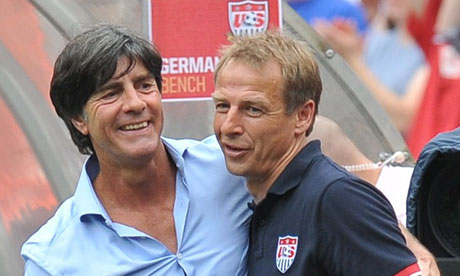 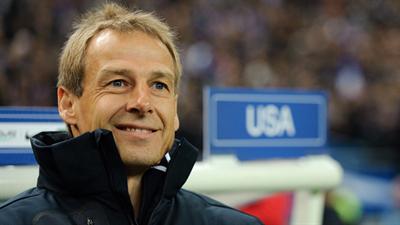 Jurgen Klinsmann was a big attraction for the international media at the FIFA World Cup Draw long before the draw actually took place. But after the United States were drawn into the Group of Death, a group headed by Germany, the German legend’s interview was even more sought after.

It was impossible not to feel for the normally chipper and bubbly Klinsmann. He wanted so desperately to avoid Germany for emotional reasons, and he wanted so badly to avoid a trip to Manaus for practical reasons, was punched in the stomach.

In interviews after the nightmare draw was complete, Klinsmann’s face and voice dropped to a hollow low when asked about the looming matchup with Die Mannschaft. He said, “I kind of had a feeling in my stomach that we would get Germany.”

So as Klinsmann patiently answered questions in the mixed zone after the even, and tried to muster a brave face, a poignant, unobvious question was asked. When the USA play Germany, will Klinsmann sing the German national anthem from the American dugout? His answer was “Yes”, in a matter of split seconds.

On the face of it, it all may seem completely innocuous. But the sight of one proud countryman singing his national anthem and then the second it ends disowning his citizenship for 90+ minutes is poetic and a tad disconcerting. Klinsmann will cut a lonely figure when that moment takes place on June 26th.

Jurgen Klinsmann is a German legend. In fact, he may just have saved German football almost a decade ago.

In 2004, Germany were reeling. They had crashed out of the group stage of Euro 2004, and with the exception of the anomaly of the 2002 World Cup, hadn’t been a contender at a major tournament since the mid-90s. It was a pivotal time.

The German FA offered the open manager job to Ottmar Hitzfeld. He said no thanks. The German conqueror of Euro ’04 with Greece, Otto Rehhagel, also passed. It was out of need rather than inspiration that Germany turned to Klinsmann, who had zero coaching experience, to take the Germany job in anticipation of the home World Cup in 2006.

Not only was the national team on the decline with a shortage of talent and flair, but the Bundesliga was flailing too. The pressure to show well in 2006 was enormous, and confidence in the national team could not have been lower.

In the humdrum world of drab and unimaginative management, Klinsmann is easy to mock. He’s earnest and energetic. He has vision, and is devoted to the image of that vision.

In the buildup to that World Cup, Klinsmann was hammered in the media, and how ironic is it that the biggest transgression in the eyes of the German public was that Klinsmann insisted upon living in America while managing the national team.

Germany had a rough time in friendlies, but Klinsmann stuck to that vision. He was all about progressive testing, fitness, and evolving style of attacking play. And he wanted that vision to translate throughout the entire country, at every level of the German game.

He wanted youth players taught differently, and the national team playing with a different swagger. He created the position of general manager as a PR guy, and focused on revitalizing the entire program. Klinsmann’s closest disciple was his assistant manager Jogi Loew. Of course, it clicked for Germany 2006. The nation was enthralled and in love as the Germans took third with a gutsy, attacking football. 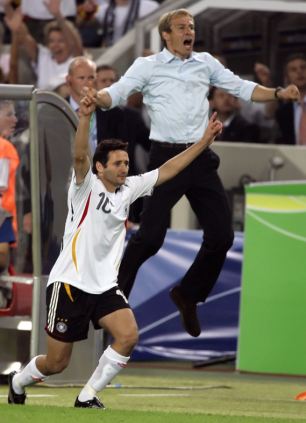 Everyone wanted Klinsi to stay on in the job. But he left, citing a need for rest, and left behind a burgeoning project that he had set in motion, but not stayed long enough to true benefits from.

When he was appointed shortly after, Loew was perhaps the most equipped assistant in the game for a top job. Under his stewardship, the Germans have been one of the best teams in the world, a stylish attacking force created in Klinsmann’s image.

How different would Germany football look right now if Hitzfeld, or the ultra-defensive Rehhagel took the job in 2004? Would the Bundesliga be back on the ascension? Maybe not. Germany, that clinical and dour country needed someone of Klinsmann’s sweeping charisma to transform their football outfit.

Yes, this German team is Jurgen Klinsmann’s baby all grown up. They have their best chance yet to finish the job and win a major tournament in Brazil, and Klinsmann is tasked with trying to stop them. His close friends. His country.

Klinsmann has a vision in the US job too. He wants the Americans to be able to go toe to toe with any team in the world. This man is a world-class motivator, and an increasingly aware tactician.

After the draw, Klinsmann said his adopted nation is not the underdog in Group G. He is wrong. But in the back of his mind, Klinsmann knows that the USA play best against the odds. Don’t count the Americans out. Not with this man in their corner.

Klinsmann is an American right now. Of course, he’ll have no devided loyalties. He’ll be all in – save for that minute when he sings the German national anthem.

The United States of America has been good to Jurgen Klinsmann and his family. But you can’t help but wonder if he has any regrets about leaving the Germany job after 2006. He could easily have been on the other sideline June 26th in Recife.