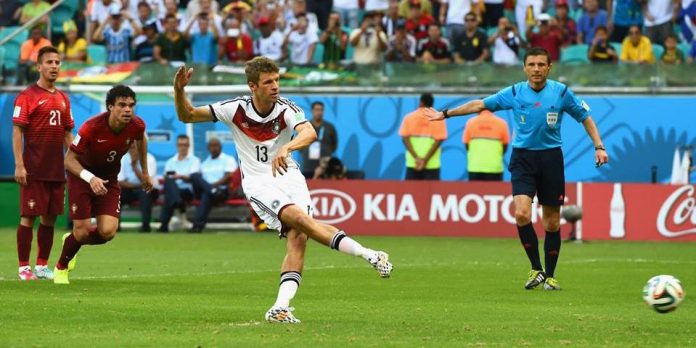 Germany thrashed 10-man Portugal this afternoon in Group G with Bayern Munich striker Thomas Muller scoring a hat-trick, but the first half sending off of defender Pepe effectively ended the match as a contest, with Portugal chasing shadows in what was an ominous second half from the 1990 winners. 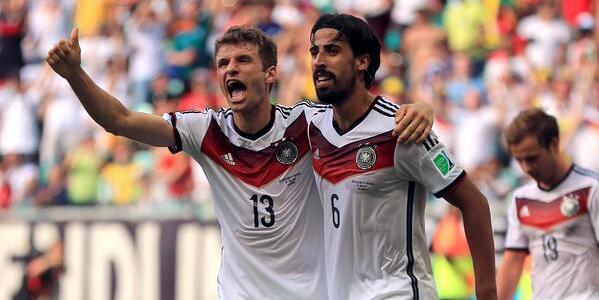 With his trio, Muller took his World Cup tally to eight goals in seven matches since his tournament debut in South Africa 2010, with the striker ruthless in front of goal throughout the match in Salvador.

The 24-year-old bagged his first from the spot early in the first half after Mario Gotze was brought down by the otherwise excellent Joao Pereira. Portugal had arguably matched the Germans in the opening exchanges, and the first goal was crucial, with Muller and Germany drawing first blood.

It was 2-0 just fifteen minutes later with defender Mats Hummels directing a bullet header past Rui Patricio in the Portuguese goal. 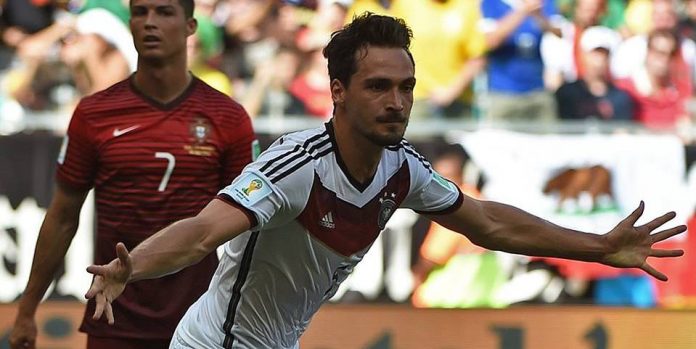 The moment of the match came soon after, with Muller going down in a theatrical heap after tussling with Pepe for a loose ball at the back. Furious with the German striker’s reaction, Pepe deemed it necessary to inform Muller of his feelings by nudging his head into the prone attacker, which sparked wild fury in the Bayern Munich man, with the referee issuing a straight red to the Portuguese centre back.

The majority of spectators were united in agreeing with the dismissal, but none could argue that it was a real shame to see the match effectively ended as a contest in the first half, with Portugal then a man down, and facing a two-goal mountain to climb. 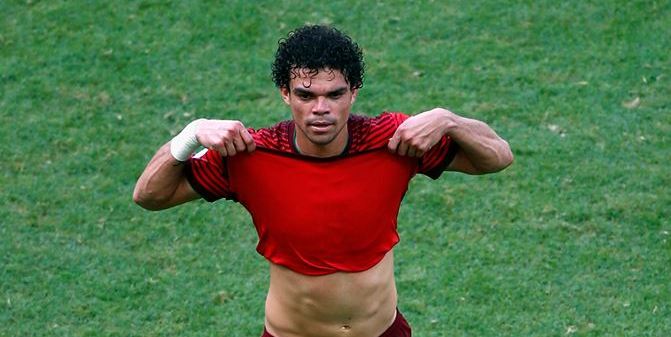 It was a mountain that Joachim Löw’s side were in no mood to let be conquered, with Muller scoring his second just before the break, and the match looked set to descend into a training session for the omnipotent Germans.

The second half was indeed played largely at walking pace, with Portuguese superstar Cristiano Ronaldo a spectator to the German machine. The Real Madrid attacker had a few pot shots at goal, but he and his side failed to really test Manuel Neuer.

Muller completed the rout with ten to go, tucking the ball home after substitute Andre Schurrle of Chelsea’s cross had been poorly parried by Patricio. 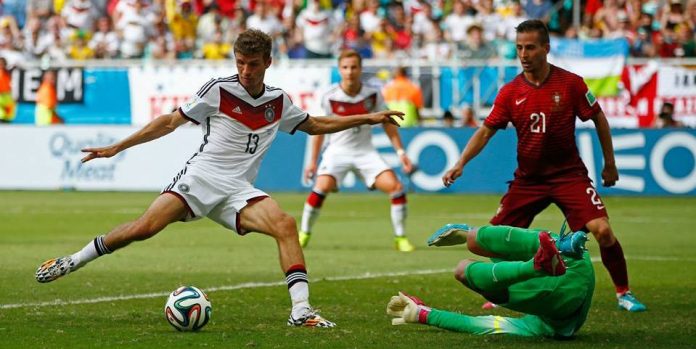 It was a scoreline highly befitting the Germans, with Joachim Löw’s side living up to their moniker as one of the early favourites for the competition, leaving a forlorn Ronaldo and his Portuguese side trailing in their wake.