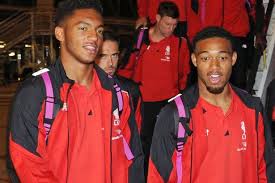 The former Borussia Dortmund manager replaced Brendan Rodgers after the latter was sacked from his post at Anfield following a disappointing display since the start of the season.

Ibe was recalled by the Northern Irishman from his loan spell in January. Meanwhile, the versatile defender was signed by Rodgers from Charlton Athletic earlier in the summer transfer window.

Both Ibe and Gomez featured for the Young Lions. Southgate has advised the duo to put the disappointment of Rodgers’ sacking behind them and get going under Klopp, who will kick start his Reds career against Tottenham Hotspur.

“I guess they already know that they’ve got to impress a new manager,” the Liverpool ECHO reported Southgate as saying.

“They are both disappointed because somebody who has picked them and given them a chance has gone and I think it’s important that players remember that. Once they’ve done that they have to be ready to impress the new manager that comes in because that’s the life of a footballer.

“I have spoken to them both because we always spend a lot of time individually with players to find out how they are and how they’re doing at their club. They have been very focused on what we’re doing.”

Meanwhile, England U21 sealed a 3-0 victory over Kazakhstan in the European championship U21 qualifiers. So far, Southgate’s side have maintained an `. The senior side also went on to finish the Euro 2016 qualifiers on a winning run as Roy Hodgson’s men won all 10 matches.