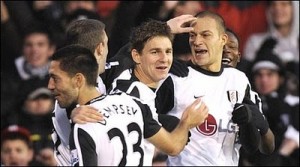 After their surprise 4-1 win in the second leg against Juventus, Fulham is now in the quarterfinals and believing they have a chance to win the entire tournament. The English side has most of their key players healthy for the match but have lost their last three matches since the Juventus win.

Wolfsburg started out in the Champions League in the fall but failed to advance to the knockout stage. They defeated Russian side FK Rubin Kazan in the round of 16 with a 3-2 aggregate win. Wolfsburg is 4-1-1 in their last six matches and earned draws in both away matches of the earlier Europa League rounds.

Fulham are growing with confidence and should be the slight favorites for Thursday’s match. They’ve proven they can beat any club at the Cottage and should get a lead heading into the second leg. Wolfsburg will be confident if they can keep it within one goal and get any away goals. A 1-0 or 2-1 scoreline seems most likely.

Fulham will iwn the match 1-0.