Manchester United fans are in seventh-heaven at the moment, judging by the comments and feedback we’ve got on this site and on our social network platforms. After all, they’ve signed Radamel Falcao – arguably one of the best strikers in the world at the moment.

There will be time to think and moan about defensive options or the lack of it, fragile midfield that has been the root cause of all problems for the last few years and yet it remained unsolved, but yesterday was a day for celebration.

Transfer deadline day. Manchester United, a club without Champions League to offer, sign Radamel Falcao on a season long loan from Monaco with an option to make it permanent, that’s one hell of a signing!

For a while let’s forget about his astronomical wages that amounts to £16m in one year, the sheer thought of him donning the Red shirt and frightening the opposition defenders gives an extra goose-bump.

He said yesterday: “I am delighted to be joining Manchester United on loan this season,”

However, his arrival hasn’t been well received by Spanish press. He was one of the main reported targets of Real Madrid, who signed Manchester United striker Javier Hernandez on the transfer deadline day.

Needless to say, Hernandez was never their first choice. It was always Falcao. Marca in absolute shock, produced this headline on their website yesterday: 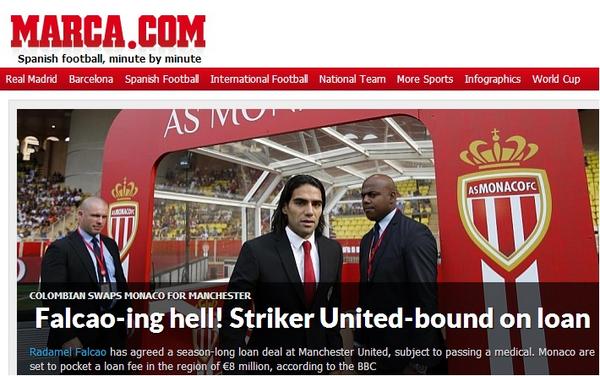 Another Spanish newspaper, El Confidencial who have close contacts with Real Madrid claim that super agent Jorge Mendes tried to everything to take Falcao join Real Madrid in summer. However, Madrid probably didn’t want to meet his wage demands and signed Hernandez instead.

The newspaper claim the player’s desire was always to wear the prestigious White Real Madrid shirt while Mendes tried to convince both Ancelotti and Madrid president to sign Falcao. Sour grapes!