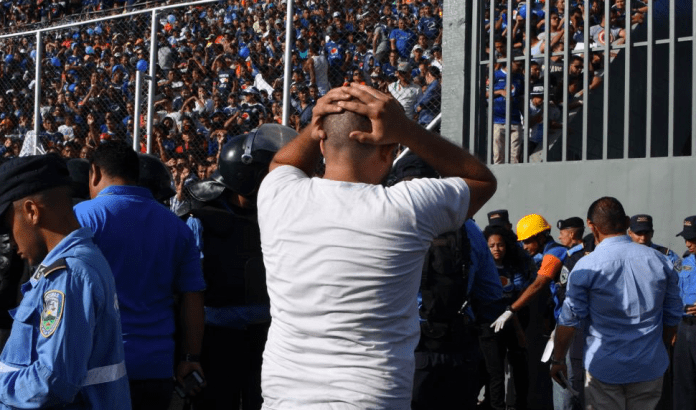 A stampede at a sold-out game in Honduras has resulted in the death of at least four people, with many others injured.

The incident occurred in a football match between Motagua and Honduras Progreso in the Honduran capital, Tegucigalpa. It would have been a day of celebration with Motagua being crowned champions, but instead, it was sadly marred by tragedy.

According to news agency AP, a police statement claimed too many tickets had been sold. According to the police, a group of fans tried to enter one section of the stadium in a violent manner.

Motagua club president, Pedro Atala said false ticket sales caused the incident but denied that his club was responsible for selling too many tickets.

He said the incident occurred “due to the selling of fake tickets and an increase in the number of fans that the police didn’t expect”.

Police maintain that they had reinforced security before the match by placing 600 law enforcement officers at the stadium,

“To ensure order and safety of those attending the sporting event and avoiding violent events, in agreement with the authorities of the National League, it was decided to reinforce the control measures for the entry of fans into the stadium,” a statement read.

Police will now investigate the clubs to see if they oversold their tickets.

In a statement, Motagua expressed “its deepest condolences to the family and friends of the four people who sadly died in the accident at the start of the final” and wished “a speedy recovery to those injured”.

However, they added, “It is important to bear in mind that all the ticket sales are supervised, and in this case approved, by the national commission for sports facilities (Conapid), which is an agency of the Honduras government.

“The club is helping in the investigation into what happened at the stadium, which was under police control – according to the rules – as always 48 hours before any sports event.”

The game eventually went ahead, after a minute’s silence, with Motagua winning the title play-off match 3-0 on the day and 7-1 on aggregate.