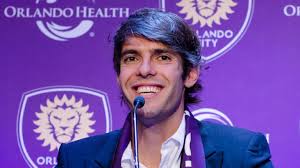 The 33-year-old left AC Milan and joined the MLS side in 2014, which was the same time Lampard was allowed to leave Chelsea. The former England international returned to the Premier League on loan as he was at Manchester City.

Kaka went on loan to Sao Paulo for a short spell in 2014, while Gerrard ended his Liverpool career and joined LA Galaxy as a free agent after the end of the 2014-15 season.

The man who helped Chelsea win their first Champions League earns   earns $1,666,668 a year at Montreal Impact. World Cup winner with Spain David Villa is on $5.6m (£3.67m), while Andrea Pirlo earns less than $2m (£1.31m) a year. The latter two are playing alongside Lampard at New York City FC.

What is MLS Players Union

It is a union formed in April 2003 and its exclusively acts as collective bargaining representatives for all current players in the MLS. The Union is a democratic organisation run by and for then players, whose ultimate control lies in the hands of the players.

The players select a representative via a secret ball-out and these representatives select five-player executive board, who governs and takes all the major decisions on behalf of the players.

Click below to get the player salaries either in alphabetical order or by club wise.