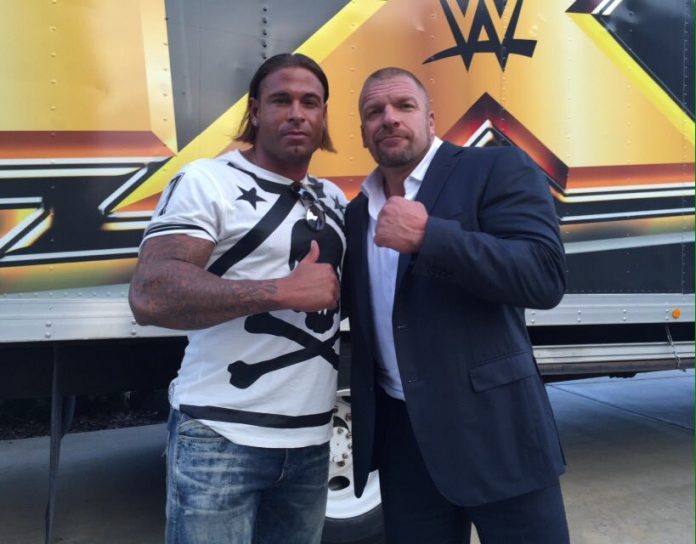 Tim Wiese is in line to make his debut with the World Wrestling Entertainment at a live event in Munich on Thursday. The former goalkeeper, who made over 250 appearances for Werder Bremen, has been training at the wrestling behemoth’s developmental centre in Orlando, Florida, since 2014. He made his first appearance for the company as a timekeeper at a live event in Frankfurt in November that year.

Now, as the The Guardian reported yesterday, Wiese will make his in-ring bow in his home country on 3rd November. He will join the tag team of two fellow Europeans, Sheamus and Cesaro, to take on the Shining Stars and Bo Dallas. Standing at 193 cm (6’4″) and currently weighing in at 120 kilos, Wiese said that he hoped he would be able to showcase his raw strength on his debut:

My game plan against the Shining Stars will basically be to go full throttle, beat them down out of the ring, and seeing as they weigh 30-40lbs less than I do, I will grab them, one with the left hand, one with the right, and end them. I’ll drop kick Bo Dallas and throw him off the stage.

He was known for his notoriety even during his football days, and Wiese will look to carry this forward in WWE, where trash-talking and getting into one’s opponents’ faces is considered an important ability. Having retired from football at just 32 in 2014, he still has a lot of time to make an impression in the world of sports entertainment.

Looking at the way he’s started, it looks like he’s going in the right direction. The character that Wiese is playing looks to be that of a brash and arrogant “big guy,” one that his real-life personality perfectly suits. Asked of any injuries he’d suffered while wrestling, he said, “That’s a stupid question, of course I haven’t had any injuries, because I dole out the punishment, I don’t receive it. Next question.”

Wiese made 6 appearances for the German national side between 2008 and 2012, and was part of the squad for the 2010 World Cup in South Africa. Having been second-choice to Manuel Neuer throughout the run to the semi-finals, he missed out on playing in the third-place playoff due to an injury. Unfortunately, Wiese’s football career didn’t pan out as expected. Starting this Thursday, it’s time for the 34 year-old to capitalise on a fresh opportunity, and make an impression with WWE. He will be greeted with a lot of enthusiasm by his home fans, but must have a solid first match to really catch the eye of the viewers.