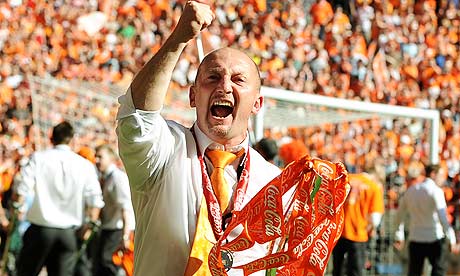 It seems that the Championship Playoff finals are often won by the team who is playing best at the end of the season. Last year, Ian Holloway masterminded a Blackpool offensive (cough) juggernaut to promotion behind Charlie Adam and against a Cardiff side who’ve developed the nasty reputation of being playoff chokers. This year, the popular picks from pundits have gone to anyone but the Bluebirds. But is there really a trend to which clubs are most successful come playoff time?

Examining table below, we can draw several assumptions. Firstly, it’s bad luck to finish fourth in the table after the regular season (another reason Cardiff City fans are cursing). Not once has a team who finished fourth won through to English football’s Big Dance.

Secondly, it’s easy to see that when a club finishes higher in the table (as in Watford, Derby County and Hull City from 2006-08), recent league form usually plays less of a part their playoff success – the two worst-performed teams over the last ten league games over the past ten years both achieved playoff success from third place. This means that the club was either safely in the playoffs or had dropped by dint of poor form from the automatic promotion places. In all three cases however, their pursuers failed to take advantage of poor form (cf. Watford 2006 and Derby County in 2007).

Also, it’s important to realise that Goal Difference counts. Every promoted club – excepting a strange mid-noughties phenomenon involving West Ham, Watford and Derby County – had a much superior goal differential to their opponents. Given before last season’s first-half scorefest, the prior 6 Playoff Finals had ended 1-0, the ability to balance defence with attack is crucial.

So how does this year’s championship reflect these trends?

At this stage it would be easy to discount Nottingham Forest as they’ve taken the least points from their last ten league matches of any club who finishing sixth over the past decade. Their collapse – lasting from mid-February to early April – should have effectively put paid to their chances. This is also reflected in their poor goal difference. However as these are finals and – as the quote goes – “You’ve got to be in it to win it”, they can’t be considered definite first-round “outs” just because a decade of stats (not a big sample) says they should be.

Reading‘s form appears irresistible. While Swansea City have won less often, they’ve done so with greater winning margins. This could be put down to facing weaker opposition or their attacking style of play. That their stats match up quite well with Watford’s and Derby County’s is also encouraging for fans of Cyril the Swan and his men. With Cardiff’s reputation as big-game bottlers perhaps overstated but disturbing reports of late-season drinking apparently close to the mark, perhaps it’s easier to discount the Bluebirds (my favourite Football Manager team) against the Shane Long-led Royals.

Fearless Playoff Predictions: Reading over Cardiff City, Swansea City over Nottingham Forest, Dave Jones to get sacked and then Reading to steamroll back into the Premiership, leaving Cyril the Swan distraught, tired and emotional.