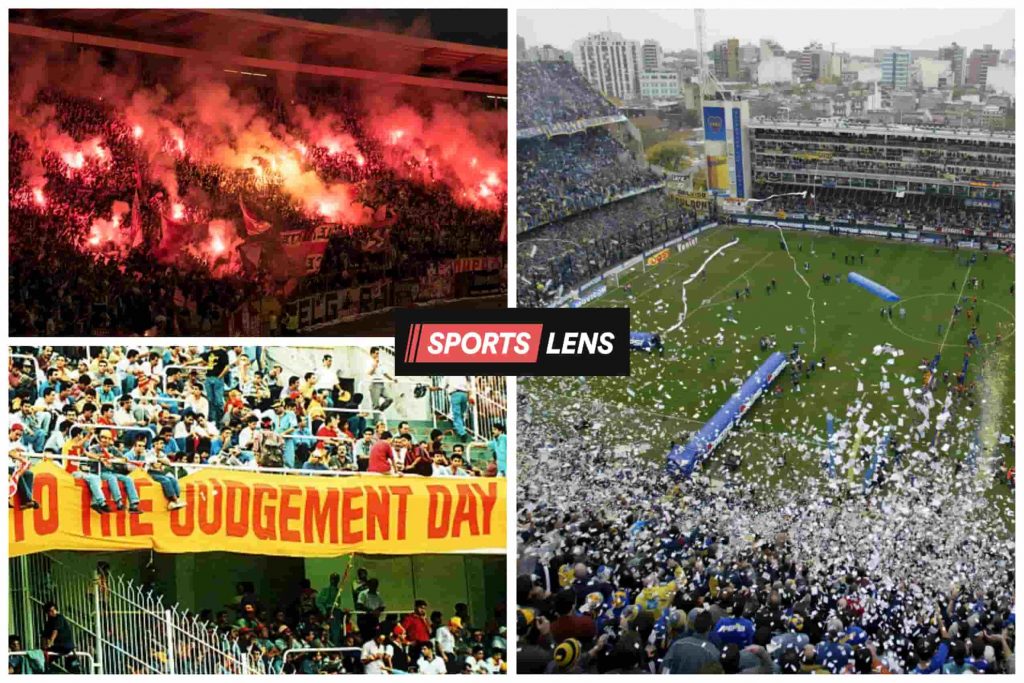 There is nothing quite like the feeling of going to a match day; the intensity of the crowd, the pre-game chatter vibrating the eardrums, the crescendo of noise cascading down from row Z as the players enter the pitch.

However, there are a handful of stadiums where the atmosphere is so fervid that it becomes intimidating, particularly if you are a travelling fan or player.

In this article we will take a comprehensive look at the select few in world football who strike fear into opposition teams, and what it is about their fanbase that makes them so impassioned.

Home to Argentina’s second-most successful club, La Bombanera is situated in the south east of Buenos Aires, a city widely known for its fiercely passionate fans.

Home to some of the country’s greatest footballing exports including Diego Maradona, Juan Roman Riquelme and Carlos Tevez, you would be hard pushed to find a more intimidating atmosphere in South America.

On match days, over 55,000 fans can be seen bouncing up and down in unison, creating the illusion of a living, breathing stadium. Fan footage has even shown the concrete stands moving and vibrating having separated from its long-standing foundations.

I've been on the stadium tour. The guide said the away teams changing room was under this stand, so that the Boca fans jumping up and down would intimidate them…(or kill them, by the looks of it). Funnily enough, she never mentioned the stadium being a death trap 😳

If you are ever lucky enough to find yourself at a Boca home fixture, you will need to be particularly vigilant once they score as an ‘avalanche’, as it is affectionally known, of fans will rain down from the stands to get closer to the players in a passionate release of joy.

One of two historic football clubs in Serbia’s capital of Belgrade, Red Star fans are infamous for their virulent history of hooliganism born out elements from English and Italian football culture.

The Rajo Mitic stadium is a an oval-shaped, open-air cauldron, which home fans have dubbed the ‘Marakana’ due to its likeness with Brazil’s famous national stadium.

On match days, the ominous glow of red pyrotechnics can be seen from miles around, and the regimented roar of 53,000 fans is defeaning.

Since the 1970s, fans of the club have been noted for inciting riots and fighting rival fans across the decrepit Eastern Bloc stadiums of former Yugoslavia, and have been dealt numerous stadium bans in recent years for a litany of crimes including intimidating officials, racial abuse and even throwing petrol bombs.

Not a place you would book for a relaxing away day.

While not necessarily a terrifying experience for fans, Anfield is known for causing even the most level-headed professionals to choke under pressure.

Housing one of the largest single-tier stands in Europe, ‘The Kop’ is a sea of red on match days, littered with flags and mementos to club legends while fans belt out the club anthem ‘You’ll Never Walk Alone’.

For 90 minutes, the Liverpool players are pushed to their absolute limit by the home support, while oppositions players are hounded and snarled out by fans just meters away from them in what feels like a claustrophobic atmosphere.

The fans have undoubtedly been the catalyst in some of the club’s famous comebacks, including overturning an historic three goal deficit to Barcelona in 2019.

We have listed some famous quotes by players who have walked the hallowed turf:

Just missing out on our top spot we have Napoli’s infamous, Stadio Diego Armando Maradona, formerly the San Paolo prior to the club legend’s death.

Naples as a city has long been cast out by the affluent north – this divide has seen bitter rivalries form between the historically more successful teams in the north such as AC Milan and Juventus, and the south’s only worthy challenger, Napoli.

The stadium is a symbol of this rebellion from Italy’s ostracised south, existing as its very own ‘Colosseum’. It is rough around the edges, just like the city, but the passion and intensity oozing from every crevice is truly something to behold.

Crumbling walls and unnerving narrow pathways really make for a gladiatorial experience, and the fans themselves even caused a mini earthquake against Benfica in 2016.

According to Italy’s National Institute of Geophysics and Volcanology, the noise of the 42,000 supporters at the stadium caused tremors in the local area.

And so, we arrive at what we believe to be the most intimidating atmosphere in world football.

There are many ways to describe a match day in Istanbul’s New Stadyumu, but one metric that highlights just how electric it can be is the decibel level.

Thankfully, science is on hand to demonstrate just how loud it can be, and Galatasaray fans hold the record for the loudest football stadium in the world at 131.76 decibels, which has been officially recognised by the Guinness World Records.

Manchester United fans, and players alike will not need reminding of their clash back in 1993, where the Red Devils faithful were greeted with banners of “Welcome to Hell” and “Hey Man United, these are your last 48 hours”.