A dominating performance from Manchester United enabled them to a 4-0 win over Newcastle United  in the lunch time kick-off at Tyneside on Saturday afternoon.

A thumping free kick from the star of the show, Juan Mata gave the Reds Devils a half time lead before the Spaniard showed great feet to make it 2-0 minutes after the restart. 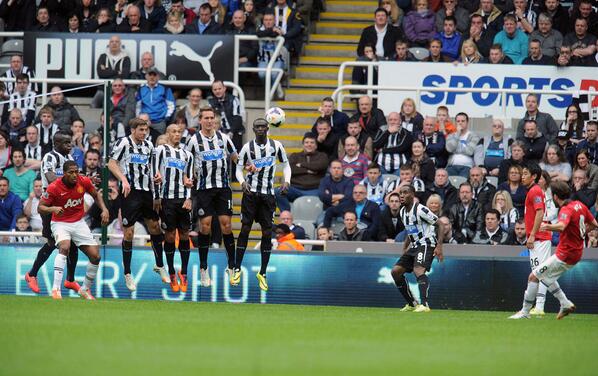 Javier Hernandez and Adnan Januzaj also got their names in the score sheet in a morale boosting win for David Moyes’ men ahead of the daunting second leg of the Champions League quarter finals against holders Bayern Munich at the Allianz Arena in the coming midweek. Here are the five things we learnt from Sports Direct Arena.

Juan Mata will soon be the heartbeat for David Moyes: Three goals in two matches for Juan Mata will give the Spaniard a much needed boost before the season ends. The Spaniard orchestrated the show for the Red Devils as he opened the scoring with a sumptuous free kick in the first half, a goal which was reminiscent of his Chelsea days. Mata then showed great feet to double his team’s lead just after the restart but it was his link up with Shinji Kagawa which will David Moyes much satisfaction at the end of ninety minutes.

The former Valencia midfielder played in his favourite number ten role and was ever present for United in the middle of the pitch, covering every inch of grass on the field (shown in the above snap). If Mata does find his feet in central role for Manchester United, make no mistake it will be his link up abilities with Kagawa, Rooney and Van Persie which can take United to greater heights in the next season.

Marounne Fellaini and his idiosyncrasies: Brute in blue, fraud in red has been the story so far the Belgian since following Davis Moyes from Everton to Old Trafford in the summer. Fellaini was time and again pushed off the ball quite so easily by the early Newcastle pressure as it culminated in an awful display from the former Everton man losing the ball time and again in the middle of the park. The 26 year old however, should have been sent off after elbowing Dan Gosling midway in the first forty five. It prompted former Liverpool and Mnachester City midfielder to tweet that Fellaini was lucky to be on the pitch.

His lack of discipline playing in the middle further highlights the lack of ability since swapping colours in the summer.  Certainly shows why Moyes’ comments on the Belgian aren’t exactly true.

Javier Hernandez makes a case for himself: The Mexican has fallen the pecking order at Old Trafford, now being the least proffered striker to Van Persie, Rooney and Welbeck in the United squad. Hernandez has now scored two goals in successive Premier League matches and would certainly make claims that he needs to stay at United next season rather than leave Old Trafford as a mere pushover. Chicarito also grabbed an assist after delightful cutback from the right to lay off for Mata leading to United’s second in the afternoon. The “Little Pea” has now scored 42 goals for the Red Devils in 83 outings.

The curious case of Hatem Ben Arfa: A sublime talent on his day, Ben Arfa’s career has been plagued with injuries coupled with Pardew’s inexplicable decisions of not starting the Frenchman in his mini French side, surely has left many at Tyneside bewildered. The dazzling talent and former Lyon man has spent much of his time on the sidelines but most of the Magpies’ faithful know the 27 year old has ability to excite and infuriate at the same time. While the latter is least preferred, Ben Arfa has also been linked to a move away from Newcastle in the last few months.

All’s not well for Alan Pardew: The Magpies boss constantly hovered on his phone shouting instructions to the bench from the stands following his touchline ban after headbutting Hull City’s David Meyler last month from the sidelines.

Newcastle began the match brighter of the two sides, pressing the ball well in the first half, but after United took the lead, the Toons explicably went into a shell. Except Pappis Cisse’s three shots on goal, which were saved brilliantly from United keeper Andres Lindegaard, the home side offered very little. Yohan Cabaye is being missed in central midfield after his departure to PSG in January as Pardew reportedly is set for a summer rebuilding job at Tyneside. If things don’t improve in the summer, it wouldn’t be long before an incessant chorus and melancholy of boos greet him on his appearance.