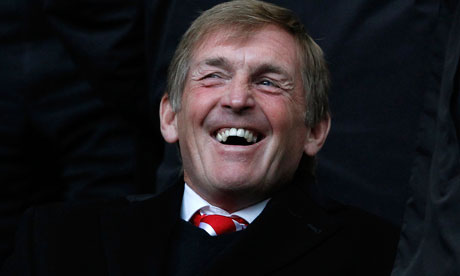 “What other areas are there to improve on – apart from points?”

From any other manager, these would their famous last words. From Kenny Dalglish, however, it’s merely an affirmation that Liverpool as a club has improved from last season.

Before we’re accused of taking this out of context, here’s what King Kenny said in full:

“The club is now where it was before – each one for each one, everybody in it together. There are many ways you can judge a season and the best way is progress at the football club as a whole. I don’t think it necessarily relates to trophies or points.

You can measure it by how the club has progressed and where it is, from the first team to the kids. Off the pitch, especially, the club is a lot stronger than what it was. You go off the pitch and see how much money we are getting through sponsorship and kit deals [the club signed a deal with US-based Warrior Sports in January worth a potential £300m over six years].

You look at the academy and see how much better it is. You look around here [at Melwood] and most of the people have got a smile on their faces now. The squad is stronger than it was last year. What other areas are there to improve on – apart from points?”

Yes, Liverpool has improved in the last year. And yes, success does relate to trophies and points – especially for a club with the ambitions of Liverpool (unless we missed the memo on Liverpool accepting that they’re not a top four side any more?). With his ‘I don’t think it [progress] necessarily related to trophies or points’ line, Dalglish to venturing into the Arsene Wenger territory of ‘what is a win, really?’.

However, forget Liverpool’s lack of performance on the pitch (based on pre-season expectations, if nothing else).Let’s answer Dalglish’s question: What other areas are there to improve on – apart from points?

Here are the five key areas that Liverpool still need to improve on:

Last summer Manchester United and Liverpool both spent heavily on new recruitments. But where De Gea is coming good after obscene amounts of initial criticism, where Ashley Young is helping Manchester United win matches and where Phil Jones is inviting comparisons with Duncan Edwards and has become a fan favourite, where do Henderson, Downing and Adams stand?

Of those three, Henderson is young enough to still come good, but where the three United signings have a strong case to be part of the starting XI and in the case of Jones and De Gea, earmarked as future greats, the three Liverpool players would be lucky if they became as good as Lucas Leiva, let alone be compared to Anfield legends.

Liverpool have strengthened the squad, but it’s one thing to buy mid-table quality and quite another to buy top-level potential. Liverpool simply need to do better in the transfer market.

Where are Liverpool with the move to Stanley Park / the redevelopment of Anfield? The need for increased capacity was highlighted over a decade ago. That 55m spent on Andy Carroll and Stewart Downing (cheap shot, I know) would have come handy in getting the stadium project off the ground.

This isn’t about whether Evra was right or Suarez was right. It’s something much more basic – the image of the club. Compare the official responses from Chelsea and Liverpool to the respective racist charges against their players – where Chelsea defused the situation, Liverpool inflamed it by creating a false conspiracy against their players. Where Ferguson refused to answer questions on the matter, Dalglish kept talking to the press. Where United players kept quiet after the incident, Glen Johnson found it appropriate to blame Evra for creating a scene.

Blame aside, Liverpool’s reactions do not show them in a good light. If it takes an order from the bosses in the US to get you to defuse the situation, you know you’re doing it wrong.

And which club let’s their sponsors talk about their internal matters, on or off the field? Standard Chartered speaking about the racism controversy was another example of Liverpool not being able to handle their public image.

Are Liverpool really happy at their current 7th place? Does this mean that they’re now firmly established outside the big four and will be the Tottenham of yesterday (who, it has to be said, weren’t happy if they were finishing 7th)? Or are they playing to at least qualify for the Champions League and hopefully push for the title? Liverpool’s goals have been become muddled, and it seems that the malaise that drove Torres away from Anfield hasn’t really disappeared – you just have less ambitious players on the pitch.

Maybe King Kenny should read this: Dalglish to blame for Liverpool collapse.

There’s no doubt that Dalglish has done a good job in some areas – but the facts are that the results aren’t good enough for what Liverpool have spent or aimed for this season.