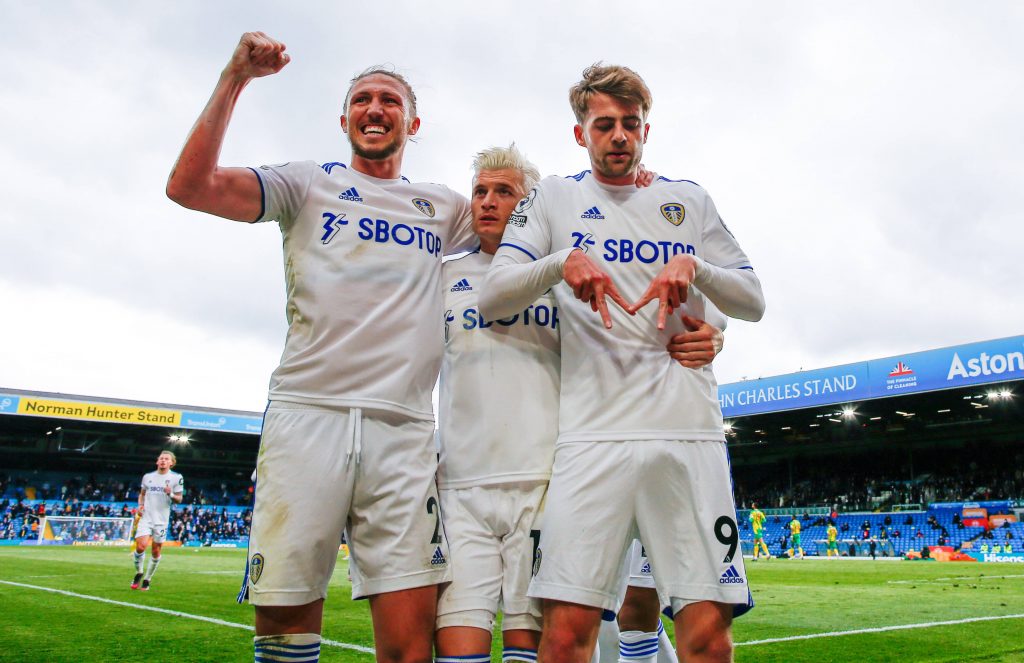 The 2020/21 Premier League season is officially in the books, with Manchester City capturing their third title in just four years.

While it was a thrilling conclusion to the campaign with several different sides fighting for their European dreams on matchday 38, numerous players opened some eyes across England thanks to their impressive play.

Here are five Premier League breakthrough stars who made some serious noise.

Leeds were one of the most pleasant surprises in the EPL, finishing in the top 10 after just getting promoted last year.

The Englishman bagged 17 goals and tallied seven assists in 38 appearances for the Whites, which was historically the best campaign of his career yet.

He scored 16 times in the Championship in 2019/20, but his assist numbers weren’t nearly as good.

This wasn’t Bamford’s first time in the Premier League, either. He previously had spells at Burnley, Crystal Palace and Norwich City but failed to succeed, making just 19 appearances between all three clubs.

He may not be blessed with blistering pace, but Bamford possesses a tremendous work rate and decent ability in front of goal.

The 27-year-old is also the ultimate opportunist and has the hunger and instincts to score goals at a high level.

Unfortunately, he wasn’t awarded with a call-up to Gareth Southgate’s England squad, but if he keeps this form up, it will happen sooner rather than later.

The Toffees got off to a red-hot start to begin the term, but they ultimately struggled to get results after the new year.

Everton finished outside of the top-six, but Dominic Calvert-Lewin was a clear bright spot.

The hitman fired home 16 goals in 33 league appearances, surpassing his total from last season where he hit 13 in 36 matches.

Calvert-Lewin was in brilliant form at the start of the season, scoring nine times in the first six games. Unfortunately, his consistency dwindled throughout, but he still finished sixth in the Golden Boot race.

He has also equalled the most away PL goals in a PL season by an Everton player (9) pic.twitter.com/4lhASlb5BT

The 24-year-old was lethal in the air, bagging seven with his head alone. James Rodriguez’s arrival at Goodison Park also helped Calvert-Lewin thrive up top for Carlo Ancelotti.

With impressive quickness and a sense of where to always be at the right time, Everton’s star man will be looking to contribute with England in this summer’s Euros.

However, he’ll have to make the final cut for Southgate’s squad first in the coming weeks.

Ollie Watkins arrived at Villa just days before the first match of the season from Brentford, inking a five-year deal with Dean Smith’s side. If 2019/20 with the Bees was any indication, the Lions were in for a treat.

Watkins hit the ground running, scoring five goals in his first five competitive appearances for Villa. He even netted a hat-trick in the famous 7-2 thrashing of Liverpool in early October.

The 25-year old eventually finished with 14 goals and five assists in 37 Premier League appearances. Keep in mind, this is a player who was playing seventh-tier football six years ago.

It’s truly a great story that Watkins has even got to the peak of England’s footballing system, never mind succeed at such a terrific rate.

🏴󠁧󠁢󠁥󠁮󠁧󠁿 No English player has scored more PL goals in a single season for Aston Villa than Ollie Watkins (14) pic.twitter.com/sMfOP3vDjv

He is extremely versatile in the final third, too. Watkins scored seven goals with his right foot, four with his left, and three with his head.

Jack Grealish’s creativity definitely helped the striker get goals, but just like Bamford, Watkins’ work off the ball is what has made him such an instant hit in the Premier League.

If he loses possession, Watkins is fighting tirelessly to either disrupt the opposing backline to make a senseless pass, or he’s up around the middle of the pitch defending for Aston Villa.

Watkins is also in the initial 33-man England team, but he’s not a shoo-in for next month’s tournament quite yet as Southgate plans to cut the squad down to 26.

Despite Leicester spending more days in the top-four than any other side in the Premier League, they ultimately slipped up in the final weeks of the term and finished fifth.

Disappointing, to say the least, but the Foxes have Kelechi Iheanacho to thank for keeping them afloat.

The Nigerian’s goals came strictly in the last four months of the season, but they were crucial.

He ended up netting 12 times in 25 EPL appearances while also scoring another seven in FA Cup and Europa League play.

Jamie Vardy went ice cold from the turn of the year until the final game in a defeat to Spurs where he bagged a brace.

This season, Kelechi Iheanacho became the first player in Premier League history to score a goal on every day of the week!

The Nigerian has had an outstanding season and what a stat to top it off! #LCFC pic.twitter.com/jKqkwyV5bQ

Iheanacho meanwhile scored 14 goals in his final 15 games, with the majority of them coming in league action.

His first Premier League goal of 2020/21 didn’t come until February 3. He was the main man up top for Brendan Rodgers with Vardy in poor form, and he had no problem rising to the occasion.

Iheanacho ultimately finished as Leicester’s top scorer, but Vardy definitely played had a role. Before this season, he barely started alongside the Englishman.

However, they featured together a whole lot and it’s clearly helped Iheanacho’s confidence knowing that he isn’t just a substitute for Vardy but his partner now.

Could Iheanacho be the 36-year-old’s heir? It’s sure looking like it.

Now we all know Jesse Lingard was once one of the brightest youngsters in England with Manchester United, but the last couple of years have been rough for him, both on and off the pitch.

However, after falling out of favour at Old Trafford, a loan spell to West Ham in January has completely revived what was once a promising career.

Jesse Lingard in the Premier League this season:

His creativity and versatility were on full display at the London Stadium, and you could see that he was honestly enjoying playing football again.

Lingard’s goal was to find his way back into the Three Lions, and that he did. He was called up in March for the qualifiers, but he’s still fighting to make the final roster for Euros.

David Moyes would love to have Lingard back in a West Ham shirt next term, but the Red Devils have insinuated they want him to return to Manchester with one year remaining on his deal.

Nevertheless, Lingard has found himself once again. It was a treat to watch.