The St. Petersburg stadium, which is currently under construction on Krestovsky Island will host the  2017 Confederations Cup as well as the 2018 FIFA World Cup. The brand new stadium in Russia has been in the news since early construction began, back in 2007.  With a state-of-the-art pitch and a roof that is supposed to melt the winter snow, the stadium was meant to bring pride to the Russians when the FIFA tournaments began.

Instead, the USD 800 million venue, has, as with most things of this scale, caused the Russian authorities a lot of embarrassment. The pitch, as per reports, is being salvaged less than a month before the opening match of the Confederation Cup gets played.

And now, Fifa president, Gianni Infantino, has admitted there have been some human rights breaches involved in the construction of the arena in St Petersburg.

In his letter to the four of four Nordic football associations presidents on Monday 22 May, Infantino said, “Fifa is aware of and firmly condemns the often appalling labour conditions under which North Korean workers are employed in various countries around the world.”

He also acknowledged that an inspection team for Fifa’s “Decent Work Monitoring System”, which was set up to address concerns about human rights abuses, found strong evidence for the presence of North Korean workers on the construction site in St Petersburg” on a visit in November.

Problems over the pitch are of critical concern with matches taking place in under a month.

When home team Zenit St Petersburg locked horns with Ural Yekaterinburg last month, the pitch was visibly patchy with uprooted chunks of turf, causing huge concern over the suitability of the venue just for league matches. At a World Cup, the stakes are even higher.

The host nation will face New Zealand at the venue in just around three weeks, on June 17. Work should have ideally been complete with the facility in top shape. Instead, workers have begun working on the turf, trying to get it in shape.

Speaking on the matter, anti-corruption campaigner Alexei Navalny said, “We were supposed to receive a fairytale stadium, the best in the world, in ideal condition. It was one of Russia’s most important construction projects, and money was stolen nonetheless”.

It is not just the grass that has been under scrutiny. There were concerns with what is supposed to be the stadium’s world class ‘retractable pitch’. Apparently, it made the playing surface vibrate, which made many question, whether the venue could host any games. The roof too has failed tests to assess whether the high winds coming from the Gulf of Finland could be endured. It leaks, and could collapse if snow accumulates and cannot be removed.

The video scoreboard, supposed to be provided by a firm saw the former deputy governor of Saint Petersburg, Marat Oganesyan arrested over a fraud scheme with the particular company. 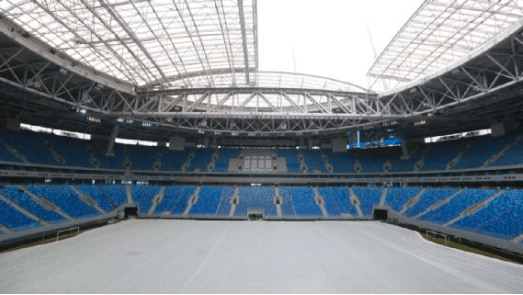 Zenit, who will eventually move into the stadium, were given the go-ahead to play games there but after just playing two of the three planned matches, they have been moved out to the old Petrovsky stadium, to ensure the grass doesn’t get damaged.

Zenit’s chief agronomist Konstantin Kreminsky has put the blame on Bamard; the Russian company hired to deliver the pitch. In an interview with RBK business daily last month, he said that the pitch had been poorly prepared for Saint Petersburg’s winter and that there had been “fungal diseases” and “a lot of mould” on the grass in late February.

Bamard, on the other hand, firmly stand by the fact that the company did in fact, fulfil its contractual obligations when delivering the pitch in the autumn and that FIFA approved it. The problems only came later.

A lot can change over a few days. According to reports, organizers have started the “active phase” of laying a new pitch, and it should be finished by June 2, Deputy Prime Minister Vitaly Mutko told Russian agency R-Sport.

The pitch at the 1-billion-dollar stadium in St.Petersburg is being replaced. 1 month after the opening match,4 weeks before the Confed Cup. pic.twitter.com/OpFr8HpQsD

The World Cup will be the biggest international sporting event in Russia since the 2014 Winter Olympics in Sochi, where Russia spent $50bn. The Confederation Cup is a prestigious tournament in the run-up to it, designed to ensure the mistakes from the tournament can be rectified in time for the showcase event in 2018. In just under a month’s time, we will know where Russia stands in preparation for the marquee event.