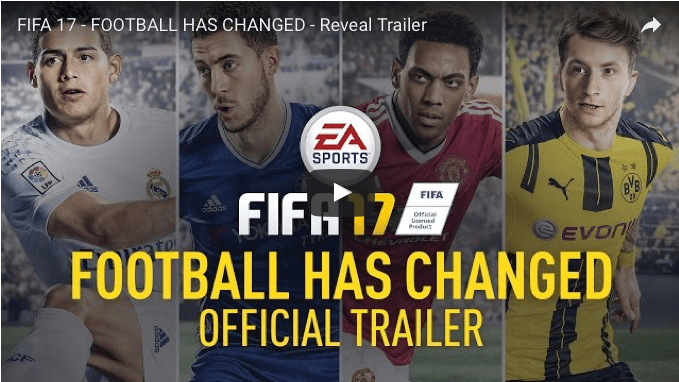 The presence of the Frostbite engine logo confirms that EA has switched from the Ignite engine that was used in previous editions.

It remains to be seen whether FIFA 17 loses some of its unique features in the move to Frostbite. It is however only available on next-gen and PC devices only.

The most popular game in the world also introduces four new football ambassadors who have apparently “influenced complete innovation in the action on the pitch”.

Anthony Martial: The 20-year-old became the most expensive youngster when he joined Manchester United last summer for a reported fee of £36m from Marseille. He silenced his critics with 17 goals in his first season at the club.

Eden Hazard: The Chelsea winger has endured a frustrating campaign for the Blues, but Belgium national team will be hoping that he produces his best form at Euro 2016.

James Rodriguez: Like Hazard, the Colombian superstar has had a disappointing season with Real Madrid, as he fell out of favour to both Rafael Benitez and Zinedine Zidane.

Marco Reus:  The 27-year-old winger has scored 19 goals for Dortmund this season but will miss Euro 2016 for Germany through injury.

EA Sports’ FIFA 17 has also released a trailer that features a voiceover from new Man United boss Jose Mourinho. Check the video below: