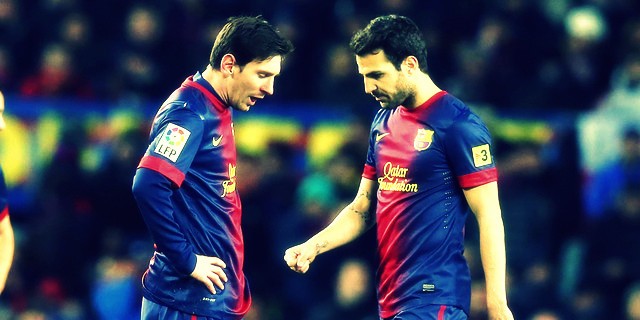 Only a few years ago the (almost) unthinkable happened, several of the largest financial institutions in the world were on the brink of financial collapse due to miscalculating the risks involved with the sub-prime mortgage market, which would eventually lead to the housing and credit bubble.

Years of profitability led those involved to believe that they could take even more risks to reap even greater financial returns. Ironically enough, the key players in this mess failed to realize that they didn’t fully understand the market they created themselves.

In the end a global financial meltdown was just avoided through government bail-outs.

Perhaps the analogy is flawed but it resembles the current situation FC Barcelona finds itself close enough. The Catalan club has emerged as one of the (perhaps the) most dominant institution in sports since the turn of the millennium.

As far as football matters are concerned, La Liga leaders are the most successful club side of the 21st century, while in terms of commercial revenue second only to Real Madrid.

The last 5 years in particular have been very kind to the Barcelona outfit, having won 14 out of 20 possible trophies. But as it is always the case with overwhelming dominance – complacency is never too far behind.

Pep Guardiola’s team (2008 – 2012) was often lauded as the greatest football side in history due to their unprecedented success coupled with their attractive playing philosophy. Opponents, big and small alike, were not defeated but demolished and outclassed on their way to domestic and continental supremacy. 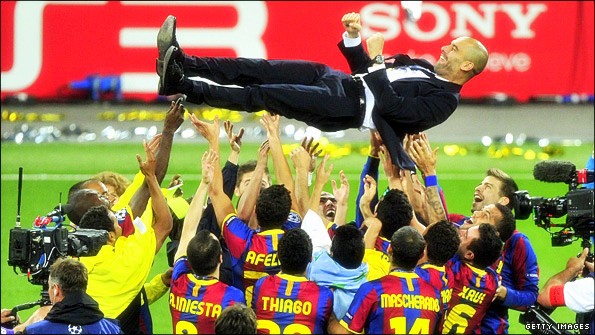 It’s no coincidence that since the 2007/2008 season the Blaugrana have either been crowned Champions of Europe or were defeated by the eventual winners at semi-final stage.

Domestically the championship has been a two-horse race between FC Barcelona and Real Madrid since 2004. Hence no real surprises there, though it is a rather unfortunate development.

Football goes in cycles and it seems that we’re witnessing the end of Barcelona’s cycle of dominance, despite their 12-point lead over second placed Atletico Madrid, and 13-point advantage over Real Madrid.

The massive gap FC Barcelona opened over their Madrid rivals suggests almost absolute dominance. However, while the Alzugrana have comprehensively defeated Atletico Madrid 4-1 earlier in the season, they couldn’t beat Real Madrid over two encounters (drawing 2-2 at the Camp Nou in October ’12, and lost 2-1 to Los Blancos at the Santiago Bernabeu just Saturday).

In between Barcelona also contested a two-legged semi-final against their eternal rivals. Once again drawing one match (1-1 in Madrid) while being outplayed and humiliated 3-1, at home, in Barcelona, of all places.

Furthermore, earlier in February, the weakest AC Milan side in years, if not decades, also bettered FC Barcelona 2-0 in the first Champions League knockout round.

FC Barcelona apologists are never shy of an excuse for the shortcomings of the Catalan side. Once one criticizes the weak, if not embarrassing, displays in knockout competitions the apologists will most likely refer to Barcelona’s commanding lead in La Liga.

Before the latest and probably last Clasico of the season, this particular set of ‘fans’ reminded everyone of the ‘insurmountable’ 16-point cushion the Blaugrana accumulated until this point. This lead has now been reduced to 13 points, with 12 matches remaining on the 2012/13 calendar.

FC Barcelona has now lost 3 out of the last 4 matches in all competitions. It’s not out of the realm of possibility that the Alzugrana lose another 4 and draw a couple before the current season concludes. The aura of superiority has long gone.

To base an argument of FC Barcelona’s supremacy solely on the league standings is ridiculous and misleading. Barcelona got off to a very spectacular start, but at the same time Real Madrid didn’t find their form until the end of 2012.

Whereas FC Barcelona is still in pole position to reclaim La Liga from Los Blancos, the Madrid outfit is better situated to win the Copa del Rey and the Champions League.

Before February, FC Barcelona was probably in a more favorable position than their loathed rivals. At best AC Milan was considered cannon fodder, while beating Real Madrid would eliminate the biggest threat of the Copa del Rey altogether.

Come March Barcelona has already crashed out of the domestic cup, and needs to overturn a two-goal deficit against a tactically disciplined AC Milan side in the return leg of their Champions League Round of 16.

FC Barcelona’s management are the engineers of its downfall. All sentiment aside, by installing Tito Vilanova as the manager to succeed Pep Guardiola Barcelona’s board took a massive risk. Not because of his untested tactical acumen at the highest level but his health.

Vilanova was first diagnosed and treated for cancer in 2011, a relapse can never be ruled out as was the case with Barcelona left-back Eric Abidal.

In addition the Barcelona board chose to entrust Jordi Roura – who was fired during the 2007/08 season by then-division three side Hospilatet after overseeing their free fall – with caretaker duties in absence of Tito Vilanova. 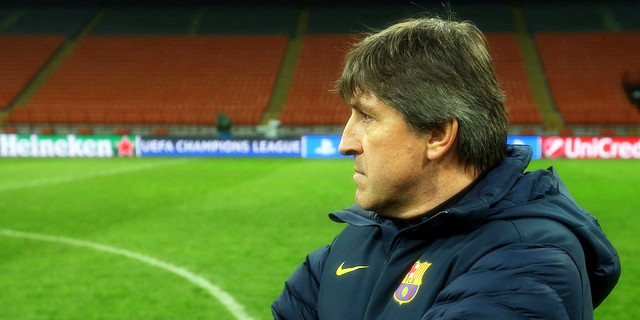 Apparently Barcelona aspired to be trailblazers in the way management is approached too. According to various news reports the Catalan club has installed webcams on the training ground to provide Tito Vilanova, who undergoes chemotherapy in New York City, USA, with the means to ‘oversee’ the daily practice of his team.

Maybe FC Barcelona is onto something. Who needs an actual manager when webcams and smartphone applications are all one needs to run a competitive sports team?

Pep Guardiola has been in NYC ever since he left his post as the manager of FC Barcelona. He could’ve done the job too.

Moreover, the inspiring and indomitable Eric Abidal has been fighting with cancer for the past two years (hopefully he has defeated the vicious disease for good).

It’s not like Barcelona’s board were not alerted to the possibility of a relapse.

Agreed, a person’s well-being always comes before sporting matters, or all professional matters – period – but why would the board still hold onto Vilanova instead of temporary relieving him off his duty until he was fully recovered and hire an interim manager instead?

Also, why wouldn’t Tito Vilanova recuse himself if he had the best interests of the club at his heart?

Only the most optimistic (read: deluded) participant in this latest mess courtesy of FC Barcelona would have believed in the fairy tale of Vilanova’s magic recovery within weeks after intense chemotherapy.

It may sound like a harmless procedure but it is extremely exhausting on mind and body. Adding the stress and pressure of managing a football club in absentia cannot be aiding his recovery. Pep Guardiola went from having hair to go completely bald in under four years.

While the belief that anything goes has finally reached and crippled Barcelona’s management, it first manifested itself in Barcelona’s misguided transfer policy. Instead of buying proper center-backs the Blaugrana decided it was better to acquire defensive midfielders with the intention of reinventing them as (makeshift) center-halves. 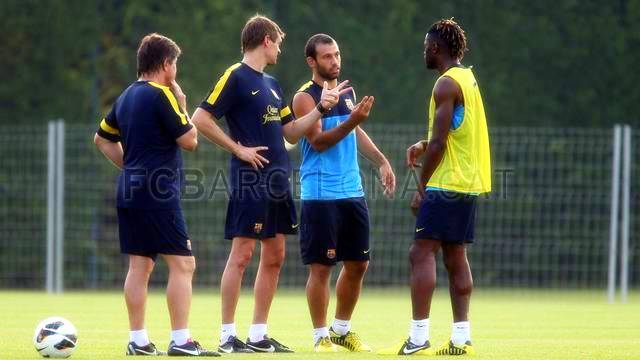 Whereas Mascherano looks good enough against average sides in La Liga, he has been regularly exposed by top quality opponents such as Real Madrid, or in the Champions League. Alex Song… well, he hardly features in any big games, or knockout games of any kind.

Bottom line: Barcelona could field a three-man defense against the majority of La Liga without risking much. However, exceptionally good counter-attacking teams are likely to make a feast out of Barcelona’s wobbly defense.

Mascherano and Song have cost the Blaugrana a combined €39 million and don’t offer much protection against genuine world-class forwards.

In an era where Barcelona’s board preaches financial austerity, and have even sanctioned a shirt sponsor to generate income, these two purchases in particular don’t make any sense. Not from a sporting or economic perspective.

The Blaugrana could’ve bought a proven La Liga center-back, even one who spent the majority of his formative years at Barcelona’s own La Masia academy, Alberto Botia, at a cut-price €5 million in the last summer.

Barcelona passed on the opportunity and extended the contract of Carles Puyol until June 2016 just recently. By the time his contract expires Puyol will be 38 years old (!).

As far as new recruits go, the clubs vice-president, Josep Maria Bartomeu, recently stated that Barcelona will bid for Brazilian prodigy Neymar when he decides to leave his native.

Since most of Europe’s heavyweights are keeping tabs on the Santos’ boy wonder he comes with a price-tag of approximately €50 million (give or take €10 million).

All season Barcelona has struggled to keep a clean sheet and their solution is to buy another (expensive) forward when the club has to tighten its budget.

Management is supposed to fix problems, not create more. Also, FC Barcelona is supposedly one of the biggest and best professional sports institutions in the world but nothing; absolutely nothing lends credibility to this notion. 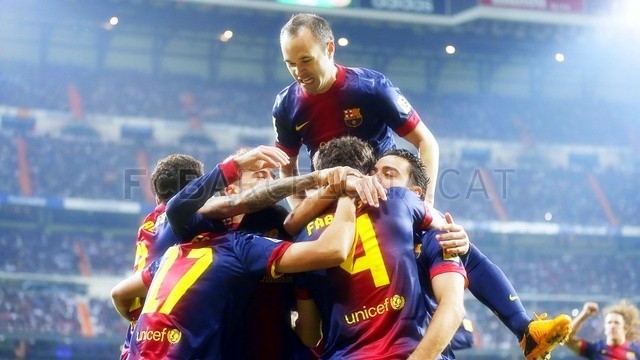 Perhaps FC Barcelona is indeed too talented to fail. But then again, its management is too incompetent to establish an ongoing supremacy.

Barcelona fans shouldn’t be so gung-ho about the 12/13-point lead over the Madrid duo. It’s simple math: