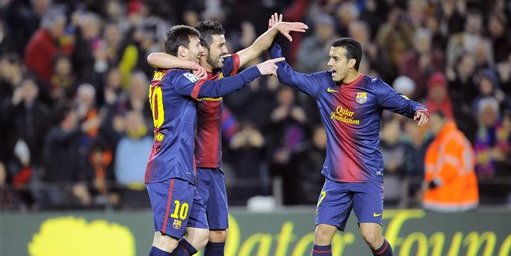 Just a few days after FC Barcelona were mercilessly exposed by Italian outfit AC Milan in the first leg of the opening knockout round of the Champions League, the La Liga runaway leaders once more struggled to overcome a defensively disciplined team.

This time Andalusian side Sevilla FC presented more of a challenge than the Blaugrana would’ve liked. The Catalan team won the match eventually after falling behind 0-1, courtesy of an Alberto Botia header. To add insult to injury, Botia is a graduate of FC Barcelona’s famed La Masia academy.

Who else to highlight the Blaugrana’s defensive shortcomings than a former youth product? 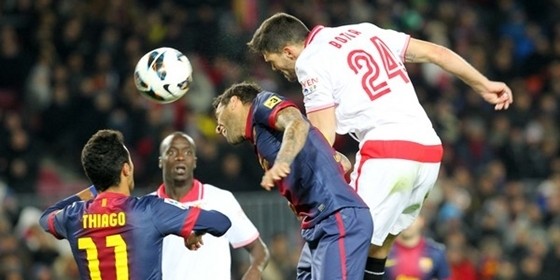 It’s still rather baffling that FC Barcelona passed on the opportunity to activate the buy-back clause (rumored to be around €5 million) for their former prospect.

FC Barcelona’s defensive frailties are well known. At this point conceding a goal in any given game has become the norm rather than the exception. FC Barcelona doesn’t discriminate; everybody is welcomed to take advantage of the Blaugrana’s abysmal defending.

The facts that the Blaugrana hold a 15-point lead over second place Atletico Madrid (potentially 12 points) and are 16 points ahead of third placed Real Madrid is somewhat misleading.

Of course this FC Barcelona outfit has broken and continues to break records to arrive at this point. However, the Blaugrana aren’t as superior to the rest of La Liga, or Europe for that matter, as the league table would suggest.

FC Barcelona have already conceded 28 goals in just 25 games (1.12 goals per game). In comparison, in the historic treble-winning 2008/09 campaign the Blaugrana only conceded 35 goals on their way to claiming the La Liga title (0.92 goals per game).

Their defensive record in the 2010/11 season even improved on that excellent record. The then-Pep Guardiola managed outfit just conceded 21 goals (0.55 goals per game) in 38 games.

After their first leg encounter with AC Milan at the first Champions League knockout round the Blaugrana have already conceded six goals in the competition thus far. On their way to Champions League glory in 2008/09 the Barcelona outfit conceded 13 goals.

Nevertheless, three of those goals came in a meaningless dead-rubber tie against Shaktar Donetsk when FC Barcelona were already qualified for the knockout stages and fielded a B team. The 2010/11 incarnation of the Blaugrana only allowed nine goals when they conquered Europe.

The statistics suggest that for all their prowess in front of goal, it’s the stability provided at back that is the foundation that FC Barcelona’s success in La Liga as well as in Europe is built upon.

This Barcelona team, however, is leaking goals – having just kept eight clean sheets in La Liga and the Champions League. It’s quite a horrendous record.

FC Bayern Munich, one of their main rivals for the 2012/13 Champions League title, and Pep Guardiola’s next managerial destination, has just conceded eight goals after 23 rounds of Bundesliga football. 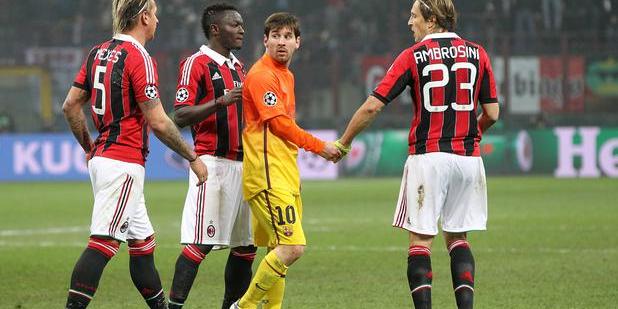 Though they have been equally as wobbly in Europe as the Blaugrana – as far as conceding goals is concerned – they allowed more than one goal just once (against BATE Borisov in a 3-1 upset at the group stages).

Furthermore, FC Bayern Munich won their away game at Arsenal 3-1 in the first knockout round as opposed to FC Barcelona’s 2-0 away defeat to AC Milan.

At this point it’s safe to assume that FC Barcelona have been found out in Europe. Even in their terrific 2008/09 season the Blaugrana almost fell victim to Chelsea FC’s disciplined exercise of parking the bus.

Over two legs the Blues opted to stick to an ultra-defensive approach. And the Blues tactic almost paid off had it not been for an outrageous wonder goal courtesy of Andres Iniesta.

In the following 2009/10 season, the Catalans were dealt a master class in defending by Jose Mourinho-managed outfit and eventual champions Inter Milan. Though his team were defeated by Pep Guardiola’s side at the group stages, he made the necessarily adjustments in the knockout rounds when he realized he couldn’t face the Blaugrana on equal footing.

The concept of adjusting their tactical approach when the situation calls for it, is entirely lost on FC Barcelona’s technical staff. For whatever reason the Catalans believe to be above reproach when it comes to their football philosophy.

Furthermore, they take much pride in sticking to their principles, or in other words, being tactically inflexible.

It can be argued that FC Barcelona’s tactically inflexibility has cost them dearly in the past. FC Barcelona are the perennial favorites for the Champions League, even more so after their 2008/09 treble campaign.

Over the past five years, dating back to the 2007/08 season, the Blaugrana have either won the competition or lost to the eventual winners at semifinal stage.

From Manchester United in 2007/08, to Inter Milan in 2009/10, to Chelsea FC in 2011/12 – their opponents have always set out to nullify FC Barcelona’s attacking prowess by refusing to engage in an open match. However one feels about it – it’s a tactic that works and, more importantly, perfectly legitimate. 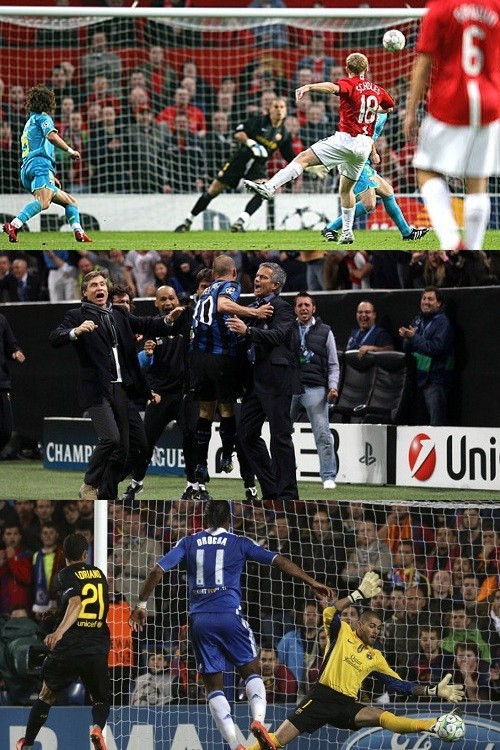 FC Barcelona has yet to find a solution for teams who mistake a two-legged knockout tie in the Champions League with a 180 minute exercise of parking the bus.

In 2009, Guardiola sanctioned the acquisition of Zlatan Ibrahimovic partly to resolve that particular problem. The then Barcelona manager had the right idea but pursued the wrong player. Though he had all the necessary technical attributes, the volatile Swede lacked the work rate and unselfishness to play second fiddle to Lionel Messi and the system in place.

Speaking of the little Argentine, La Pulga might be the world’s best player but even he can be rendered mute by a 10 man defense. More than any other player in the world the brilliant no. 10 thrives off space, which comes at a premium against ultra-defensive set-ups.

Unlike, say, Didier Drogba, he lacks the physical prowess to be an effective target man. He simply can’t bully defenders in a way the big Ivorian does.

By shifting Lionel Messi to the center Pep Guardiola has managed to unlock his full potential. On the other hand it has limited FC Barcelona variety of play. Crossing the ball into the box isn’t really an option anymore. Messi and his fellow forwards are vertically challenged.

That’s just the cold hard truth. None of them is taller than 1.74 meters. When the average height for a center-back is around 1.80 meters, it’s something of an uneven match up.

Luckily for FC Barcelona and Lionel Messi in particular, most La Liga sides feel inclined to play attacking football, lack the personal, or tactical discipline to effectively park the bus.

Over 38 rounds of domestic football FC Barcelona will not encounter too many sides that will cause them problems, nor will the occasional underwhelming display have greater consequences for the outcome of the championship.

Knockout competitions, however, pose a different challenge. More often than not a solitary goal is all it takes to end a campaign. Though their stance on the matter is admirable, FC Barcelona should tweak their tactical approach, not totally abandon it, when it comes to the Champions League.

Unfortunately, FC Barcelona continues to acquire a certain type of player (short but technically gifted) instead of adding something different to the fold. Last summer saw the Blaugrana sign defensive midfielder Alexandre Song from Arsenal London, at a €19 million price tag.

The Cameroonian was bought to provide a 2-in-1 solution of defensive midfielder and makeshift center-back should the situation require it. He now holds the rather questionable distinction of being voted the second worst La Liga signing of the 2012/13 season by a Spanish publication.

To be perfectly honest, his nomination is not without merit. He made the bulk of appearances through November ’12 and has since only featured sparingly in rather meaningless ties.

FC Bayern Munich signed their current top scorer, Mario Mandzukic, for a rather paltry €13 million in the same summer. The Croat was arguably acquired to provide cover and competition for German goal-machine Mario Gomez. Yet entering March ’13 Mandzukic is still going strong, having scored 21 goals in 33 games for the Bavarian giants.

It’s that sort of cost-effective signings that have escaped the Blaugrana in the past and present. Alexis Sanchez, bought at a massive outlay of €26 million plus add-ons (bringing it closer to €40 million), is doing his best to frustrate the FC Barcelona faithful.

Furthermore, the constant tinkering of the front three is not providing continuity of any kind. With the exception of Lionel Messi, the other two slots are rotated on a weekly basis. What’s worse, David Villa has been afforded the least opportunities to cement a place alongside the mercurial Argentine.

At times, even when fit and available, Andres Iniesta or Cesc Fabregas were preferred to El Guaje. 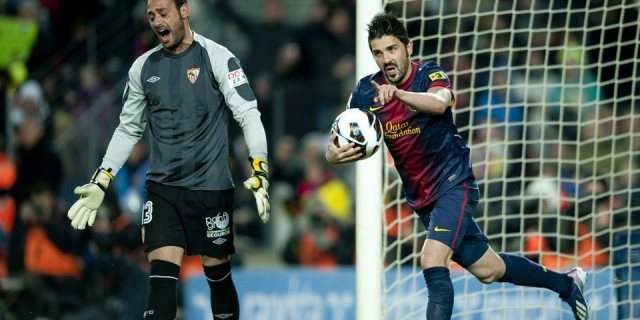 Again, over the course of a domestic campaign these things can be compensated, in a two-legged knockout tie they can be of the utmost importance.

It’s apparent that neither Tito Vilanova, his technical staff nor FC Barcelona’s director of football Andoni Zubizaretta have mapped out the 2012/13 season in its entirety.

FC Barcelona still lacks a viable alternative to its total football philosophy and the players to execute it. Instead the Blaugrana are linked with Brazilian prodigy Neymar ahead of the 2013/14 campaign, who offers more of the same.

FC Barcelona are set to reign supreme – domestically but not in Europe.

It’s a rather cruel development when a club that features some of the most creative professionals on and off the pitch lacks that little bit of imagination to make the necessary changes.

Just when “How to park a bus” has become a bestseller with FC Barcelona’s opponents, the Blaugrana embrace the antiquated novel “How to be ignorant”.