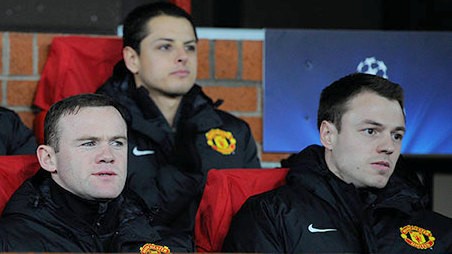 Apart from Nani’s red card that grabbed the headlines all over the media in England, other major issue that came under rigorous discussion is Wayne Rooney’s exclusion from Manchester United starting line-up against Real Madrid on Tuesday night in the Champions League knock-out tie.

Well, it’s frustrating for anyone to sit out in any big game and for a player of Rooney’s calibre it is of no exception. The 27-year-old has been one of the key members of the squad and therefore few eyebrows were raised when his name was omitted from the starting line-up.

Roy Keane, ex-skipper of United and now a football pundit covering for ITV, further gave valuable insights on Rooney’s exclusion. He was quoted in the media:

“He’s a big player and he wants to play in the big games, and he’ll be bitterly disappointed to be left out tonight. Wayne might be quite selfish about it and look at it and say the writing’s on the wall for him.”

English media have been equally quick to pick up the clue from thereon. The big observer and critics of Ferguson’s game noted that the Scotsman doesn’t hesitate to wield an axe on big name players. He has done that time and again (Jim Leighton, Ruud van Nistelrooy and David Beckham cases comes into mind) and therefore Rooney’s future has been following on the same track as well.

On 2007/08, Rooney was absent in United’s biggest game that season, against Barcelona at Old Trafford. Ferguson cited the reason of fitness, as he was injured in the preceding match against Chelsea, but many thinks the necessary change was made out of tactical demands.

The crux of the argument is Ferguson picks his best eleven according to the need of the situation. After having forged a dynasty he has earned that right of making such big calls. Ferguson never compromises with anything which he feels is right for the club. And that includes dropping a big name like Rooney as well for tactical reasons.

He was there in the first leg at the Bernabeu and played his part nicely. Probably Ferguson felt that Danny Welbeck would be the right man to execute his plans in absence of Phil Jones and his decision was vindicated.

If you think rationally, what else could he have done here? Nani always brings that element of surprise which is so essential in these types of games. Also, with so much tension and hype going on, Ferguson felt that Giggs would be the right man to calm things down in the middle of the park bringing all his experience into play.

Most importantly Rooney hasn’t said anything about it. The ideas of him falling out his manager are nothing but typical English media’s created over-reaction.