Lavezzi’s future at PSG has come under question again, and it looks like his days at the French club is coming to an end. His contract will end next June and after a reunion between his agent and the club in February 2015 (a year ago) Lavezzi knows that PSG won’t be offering him a new contract.

During the January transfer window, Inter and Chelsea approached his agent to sign Lavezzi, per Le 10 Sport, and the deal would have been possible if PSG had released him of his contract with 6 months to go, but they were against selling the Argentine winger as they knew they might not be able to find a replacement on a such short notice. 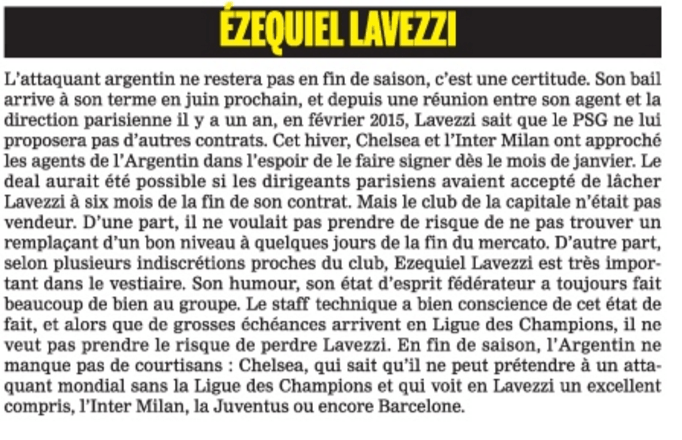 According to reports from Sky Sports Italy, Lavezzi’s agent Alejandro Mazzoni had travelled to London to hold talks with Chelsea over a possible transfer on two occasions. Chelsea probably didn’t show enough interest and passed on the opportunity to sign the PSG forward.

He is now off to China.

According to reports from Independent, Lavezzi has agreed a two-year-deal with Chinese Super League side Hebei Fortune.

Shanghai Shenhua believed to had agreed a deal to sign the Argentina international on Tuesday, but Hebei dramatically snatched his signature right under their rival’s nose.

The Argentine is expected to earn over £23.5m after tax over the course of the two-year deal. He becomes the latest European-based footballer to move to China, and will join the likes of Alex Teixeira, Jackson Martinez, Ramires and Gervinho in the Chinese league.