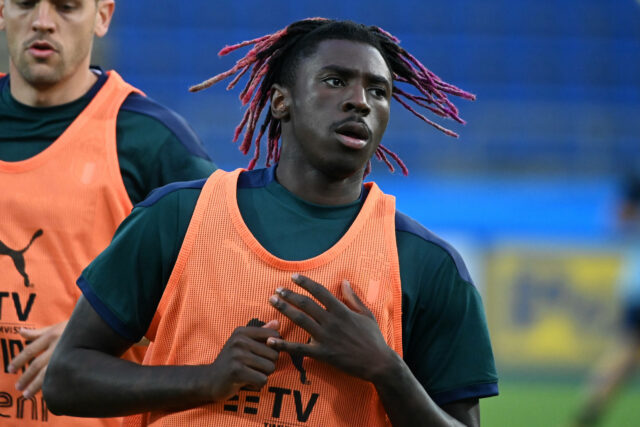 Italian journalist Fabrizio Romano has claimed that Everton are negotiating a loan deal with Paris Saint-Germain for Moise Kean.

It was previously claimed that PSG had made a €40 million bid for the 21-year-old striker.

However, Romano has rubbished such claims, saying both the clubs are still negotiating a loan deal.

Kean joined PSG on loan last season and he duly impressed, scoring 17 goals in all competitions. He would like to stay with the club.

PSG want to sign Kean on loan, with an option to sign him permanently at the end of the season. The final decision now rests with new Everton manager Rafa Benitez.

Paris Saint-Germain want Moise Kean back and it’s only loan negotiation with buy option included, as reported one month ago. NO permanent deal bid. 🔵 #PSG

Benitez has signed a three-year deal at Everton, and his appointment hasn’t been a popular one among the fans, mainly because of his previous connection with Liverpool.

Everton paid £25m to sign Kean from Juventus, and it makes no sense to waste the money in this manner.

The Spaniard must decide whether he considers Kean a good fit for his side. He has proved his class at PSG, and there’s no reason to believe why he can’t be a success at Goodison Park.

If he is not in his first-team plans, the club must look to sell him permanently and invest the money into bolstering the squad this summer.

Everton do not have sufficient backup options to Dominic Calvert-Lewin, and losing Kean for another loan spell smacks of poor transfer business from the Toffees.