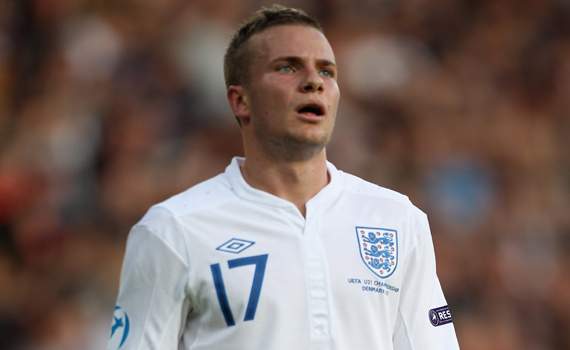 Everton have confirmed Manchester United midfielder Tom Cleverley will join them on a free transfer on 1 July.

The England international spent the 2014-15 season on-loan at Aston Villa on the deadline day of the last summer transfer window after he was informed that the midfielder was not included in Louis van Gaal’s plan at Old Trafford.

Cleverley’s contract is set to expire at on 30 June and United have decided against handing him a new deal. Now the 25-year-old will join the Merseyside club on a five-year deal.

A statement on Everton’s official website read, “Everton has agreed a deal to sign Tom Cleverley when his contract expires at Manchester United on July 1.”

“The 25-year-old England midfield player will arrive on a five-year contract, becoming the first signing of the summer by manager Roberto Martinez,” it added.

Villa manager Tim Sherwood was keen on signing the midfielder on a permanent transfer in the summer window. However, the Englishman snubbed a chance to continue at Villa Park and decided to sign for Everton.

Cleverley played under the Toffees manager Roberto Martinez when the two were at Wigan Athletic. He was on a loan at Wigan and his impressive form helped him break into United’s first team after his return to Old Trafford.

With the player now becoming the first summer signing at Goodison Park, Cleverley will get a chance to reunite with the Spanish manager. Martinez has expressed his delight after landing United midfielder.

“We are extremely delighted to be welcoming Tom to Everton and I can think of many reasons as to why our fans will enjoy Tom representing our football club,” Martinez said.

“The most important one is that he is a perfect fit for what we are trying to build here as he has so much experience of playing in the Premier League and he still has his best years just ahead of him.”

“At the age of 25 and a player who is representing his country, Tom has experienced winning trophies and having big roles in demanding teams. Having worked with him previously, I know the type of character he is and I know that, with the Everton fans’ support, we will get a very special footballer joining our already exciting team.”

“It says a lot also, when someone like Tom is available on a free transfer and he can pick his next club out of many options home and abroad, that he has chosen to play for our football club. That’s the perfect start to his career here at Everton,” he added.