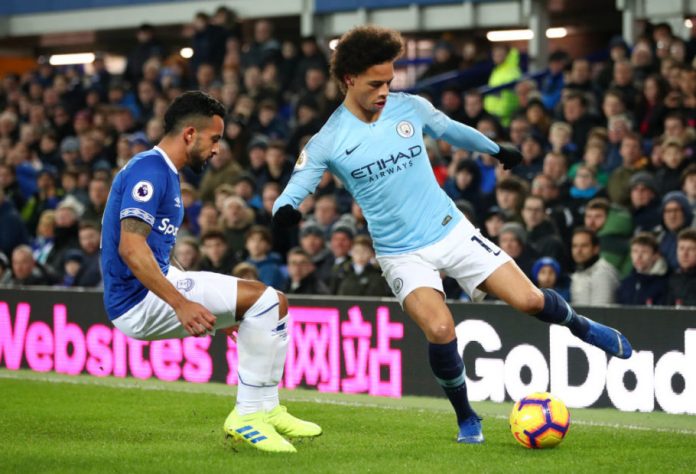 Everton crashed to a 2-0 defeat against Manchester City in the Premier League last night.

Stoppage time goals at the end of each half from Gabriel Jesus and Aymeric Laporte earned the victory for Pep Guardiola’s side.

Sergio Aguero could have scored as well but the Argentine was denied by the crossbar.

The defeat leaves Everton ninth in the table with just 33 points from 26 games.

Marco Silva is under tremendous pressure after a rocky start to life as the Everton manager and it will be interesting to see if he can turn it around against Watford at the weekend.

Everton struggled to create anything meaningful against the league leaders. The likes of Theo Walcott failed to stretch the away defence and the former Arsenal man seemed quite wasteful as well.

The fans weren’t too impressed with the winger’s display last night.

Walcott has had a poor season so far and the fans will be expecting a lot more from him. It will be interesting to see if he can rediscover his form and finish the season strongly.

Everton fans took to Twitter to share their thoughts on Theo Walcott’s performance against Manchester City and here are some of the reactions.

I think we’re all in agreement that Walcott is finished

Shite viewing that. Theo Walcott, mate….an absolute turd of a player. Never gets the cross in. Predictable in his running and mindless in his passing. An all round shit stain of a player.

Theo Walcott is our highest earner ???

Theo Walcott remains a serious issue with Everton’s attack. Offered almost nothing tonight. Genuinely seems like a lovely person, but shouldn’t be getting starts. pic.twitter.com/ZU2Kj3VPhy

What has happened to Theo Walcott?

Much better performance. Still lacking a focal point up front, hopefully that’s addressed as priority in the summer. 4-3-3 suits the squad much better, Walcott needs to be dropped, Bernard and richarlison wide with Cenk up front and we’ll improve. Kenny has to be RB now. #efc