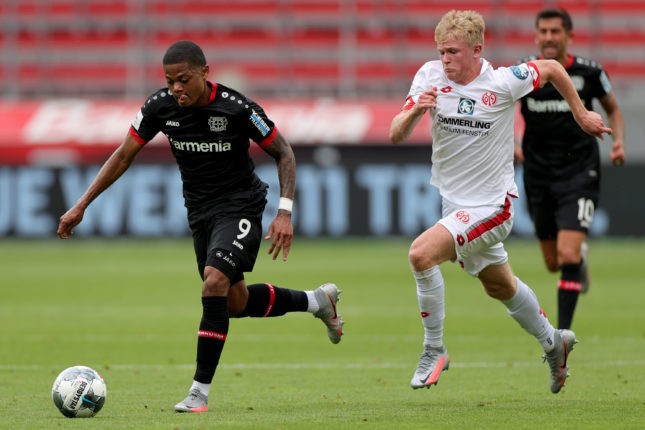 Everton are reportedly keen on Bayer Leverkusen winger Leon Bailey and have sent scouts to watch him in the Europa League against Rangers today.

The Jamaican international was also scouted last month against Bayern Munich, and the likes of Liverpool, Manchester City and Manchester United also had representatives at the game.

Everton need to boost their attack if they are to become a top-six side anytime soon, and landing Bailey could be a good move.

Tottenham Hotspur are also keen on the speed demon, and he wants to play in the Premier League next season.

The Toffees have been linked with the likes of Crystal Palace’s Wilfried Zaha, with the Eagles ready to sell him for £30 million.

They can get Bailey, 22, for around £20 million, and Everton fans are hoping that a move for him can be sealed this summer, with some of them reacting thus to the reports on Twitter:

Seen him play a few times and he’s been okay but nothing special. Unbelievably fast but couldn’t pick a man out with a cross but still ten times better than what we’ve got 😂

Bayern wanted to sign Bailey many moons ago didn’t they, was that at the time Ancelotti was manager?! Maybe explains the interest….

He has scored seven goals and assisted three others in 31 appearances in 2019-20, and he shouldn’t have a problem hitting the ground running in the top-flight given his direct style of play.

Chelsea have also been linked with the winger who once turned down a move to Anfield as he wasn’t ready to play at the highest level.

Bailey now fancies his chances and it will be interesting to see if he will be ready to sacrifice European football next term for a move to Goodison Park.