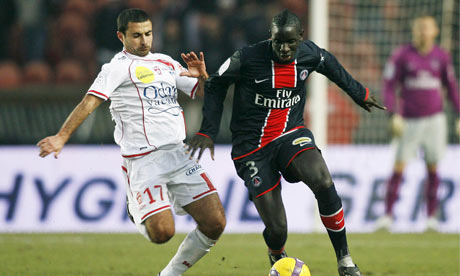 After it had appeared want-away defender Mamadou Sakho right was going to stay with Ligue One champions Paris Saint-Germain, it now seems the side are willing to cash in on him before the transfer window closes this summer.

The 23-year old released a statement months ago which alluded a number of European suitors to his availability, but no side made an official bid for his services that was considered by PSG. However, the side are now keen to push negotiations as there is around a week remaining before the window shuts until January.

English Premier League Liverpool are said be among the biggest favourites to procure his signature.

‘PSG are ready to do a deal. The interest is big and it is not surprising – he is a top talent. They are willing to sell, but want good money for him. There is a good chance he will move and could well be heading for England.’ – a source close to PSG.

Manager Laurent Blanc has stated he wants to keep Sakho with the side, but accepts his reasons for wanting to leave.

Sakho has become disillusioned with his boyhood club, as a number of new additions have seen him out-of-favour in the starting line-up. The newest signing of centre-back Marquinhos has confirmed it to the Frenchman that he needs to seek out a move to continue his development.

AC Milan and Barcelona are two sides in Europe who have also been named among the heavy weights to sign him, but are also yet to make an offer of any kind.

His asking price is said to be around £8M, which is considerably cheap as PSG are worried they could lose him for nothing at the end of next season if they hold to him – as his contract only has 12 months left to run.