The Europa League quarter final draw has been made at UEFA’s headquarters in Nyon, Switzerland today, and once we have some cracking fixtures to look forward to.

This time, the draw has no restrictions, which means teams from any country can be drawn against each other. The team drawn first will play the first leg of the quarter-final tie at home. 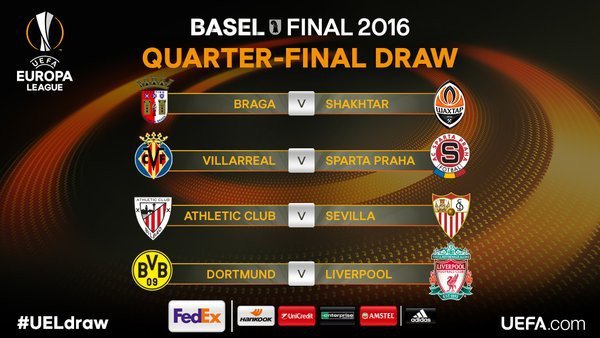 The first leg of the two legged tie will take place on 07th April, while the second leg will be held on 14th April, 2016.

The major talking point is Liverpool’s quarter final tie with Dortmund – it’s the draw the Jurgen Klopp didn’t want. It is indeed a tough draw, judging by the current form of Dortmund and the way they dealt with Tottenham in the last 16.