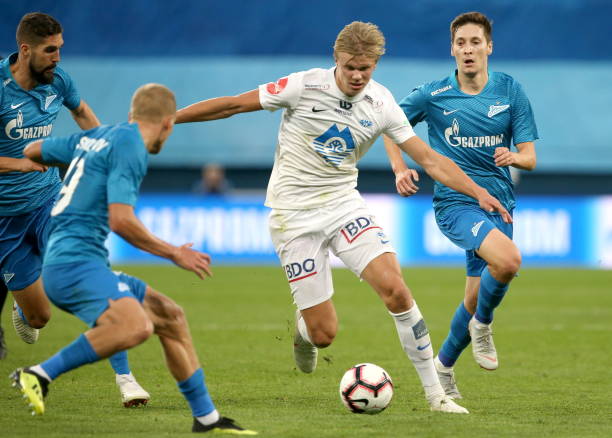 The ongoing under-20 World Cup saw the match between Norway and Honduras set the record for the biggest win by any team in the history of the tournament.

Norway under-20 breezed to a very comfortable 12-0 victory over nine-man Honduras, and Leeds United fan and Red Bull Salzburg striker Erling Haaland grabbed the headlines for scoring nine goals – the most scored by a single player in a match in the competition’s history.

The 18-year-old is the son of former Leeds United defender Alf-Inge Haaland, and while he is eligible to represent England having been born in the country, he has opted to represent Norway.

Haaland told Norwegian newspaper, Aftenposten back in 2017: “I want to be the best possible.

“The dream is to win the Premier League with Leeds. In addition, the goal is to become a better player than my dad was. I hope to get more caps than he did.”

Haaland terrorized defences during his time at Molde, scoring 14 goals in 39 league games, and Manchester United boss Ole Gunnar Solskjaer would be proud of his former player after last night’s heroics.

Erling Braut Haaland = One that got away. He plays for Norway but he was born in Leeds and is a Leeds fan. Still think it’s a shame we didn’t take a punt on him a year or two ago when we scouted him. He got a big money move to Austria in January. #LUFC https://t.co/VJ6We37S7X

The Red Devils scouted the teenage sensation last July, and his latest hat-trick of hat-tricks would surely have caught their attention (once again) and that of plenty sides across Europe.

Haaland would surely have been gutted seeing Leeds miss out on promotion, and it remains to be seen if his childhood dream of winning the top-flight with the Whites is still alive.

Leeds surely could do with a prolific striker right now and going forward, and just maybe Haaland’s dreams could come true.