It’s started again. In fact it started about a month-and-a-half ago.

The now seemingly omnipresent ‘En-Ger-Land’ white-van jingo-jango has farted it’s way back onto the front and back pages of all the tabloids, television commercials and supermarket shelves – even the sodding cakes are getting nauseatingly patriotic.

The bi-annual (don’t think for a minute that the European Championships are immune) Sisyphean optimism is back, and slowly but surely wheezing toward it’s predictable, frothing, spasmodic anti-climax yet again…

For the best part of half-a-decade now (maybe longer, my cerebral cortex won’t play fair anymore) England have largely been playing the kind of mopish plod-happy football that may very well ensure the mechanical dispatching of fellow ‘vanilla’ outfits but, in turn, sees them stunned into frozen panic like knock-kneed fawns when faced with either well-drilled have-a-go minnows or fast, fluid, technically-adept ‘continental’ (or Latin) sides.

On the surface, a 3-1 victory seems pretty comprehensive. Anyone who merely checked the score on Teletext (do people still do that?) would think it was a good result. So far so good right?

Well no, not really. Anyone who watched the game would know the truth of the matter is that, behind all the ‘Mexican Rave’ headlines, England’s performance was woeful – in the truest sense of the word. If you venture in under the bombast of the strap-lines, the write-ups and reviews of the game paint a much more accurate picture.

As if the Wembley turf were an allegory unto itself, ‘patchy’ seemed to be the overriding buzzword being used to describe the England side’s display in the majority of the following day’s press.

As Fabio Capello stated before the game, the score wasn’t actually that important. The performance, however, was.

England were systematically ran ragged. Not by particularly good players, but by mobile and adventurous players, never-the-less players that you can’t help but feel that a Spain or Brazil side (maybe even Argentina on their day) would have consummately out-ran, out-passed and out-played.

And there-in lies the crux of the problem. England (and a healthy majority of their supporters) need to accept that they are not comfortably nestled amongst the world’s elite anymore  – they are merely amongst the best of the bad bunch that follows, and have been for quite some time now.

It seems to me that the afore-mentioned (and sadly now ingrained) ‘England Expects / 44 years of hurt’ jingoism has installed a faint air of pompous self-entitlement in the current squad that has been passed down by-proxy over the years, and it’s this ‘better-than-thou’ arrogance that manifests so readily on the pitch. 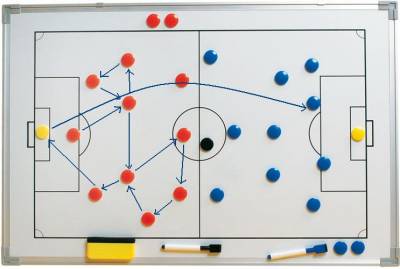 The biggest single problem I have with the current team’s  is the tippy-tappy passing they try so fastidiously (and unsuccessfully) to employ.

Granted, it works wonders and looks fantastic if you’re Barcelona or – on a more sporadic basis – Arsenal, but the key difference is that Barca do it around their opposition’s area – not their own!

England’s ‘triangles’ usually result in the same thing – the ball eventually being returned to the goalkeeper, who duly smashes the kind of pointless long-ball upfield that the back four or deep-lying midfield could have done five minutes previous – and that’s it! That’s plan A, B and C! And it doesn’t matter if the big man up top plucks it out of the sky, because he’s invariably outnumbered four-to-one once he gets it down onto the deck.

At domestic level, many of our individual players are lauded as heroes, and rightly so in most instances, but on the big stage all have yet to achieve anything – not even a consistent string of admirable or impressive performances.

Therefore, as an international collective, the England side (let alone the rest of the baying natives) have no right to place themselves amongst the favourites to lift the World Cup come the 11th of July, and I think you know it – despite what your car-flag may say.

Remember what your mother told you, national pride comes before a fall.