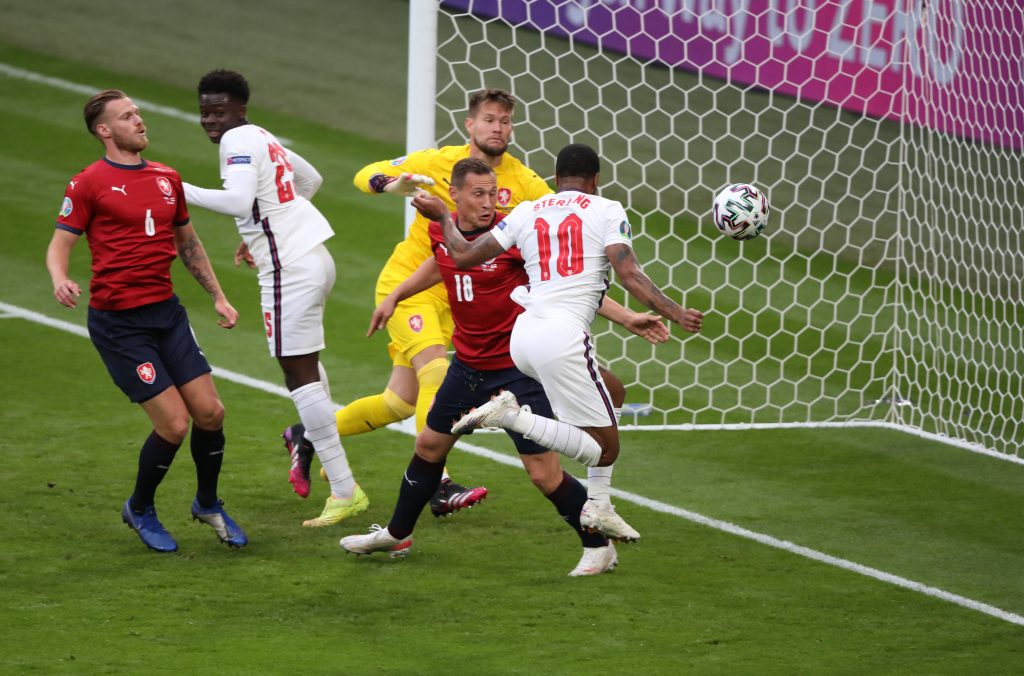 England triumphed 1-0 at Wembley Stadium against Czech Republic in their final group stage match at Euro 2020 to top Group D and set up a meeting with one of four sides involved in the ‘Group of Death’ on home turf next week.

Raheem Sterling’s 12th-minute header was enough to separate the teams, with both having already sealed their progression through into the round of 16 before kick-off.

It didn’t take long for the first chance of the night to come, and it fell to the home side in just the second minute as Sterling chased down a long ball forward from Luke Shaw to dink it over the onrushing Czech goalkeeper Tomáš Vaclík.

Unfortunately for Sterling and the Three Lions, the effort bounced the wrong way at the last second and hit the post before bouncing away.

With that, it meant that Gareth Southgate’s men had hit the post in the opening stages of all three games in Group D and coincidentally all through Manchester City players.

Phil Foden’s shot against Croatia came first, then John Stones’ header against Scotland, and now Sterling’s dink against the Czechs – how’s your luck?

England were pressing well and dominating the ball. Stones headed wide from a free-kick but soon after, the early siege on the away goal would come to fruition through the head of Sterling following a nice move.

Bukayo Saka – brought into the starting 11 by Southgate – drove forward, combining well with Kalvin Phillips and dinked the ball into the box from the right wing.

Fellow new starter Jack Grealish saw the ball go just too far over his head to be able to glance at goal but did knock the ball down to Harry Kane and received it back off him.

The Aston Villa man then danced his way to the left by-line and dinked an inch-perfect ball to the back post, over Vaclík and away from the defenders to find Sterling in space.

1-0 up after just 12 minutes, England were in the ascendency and could have had another had the opposition keeper not reacted well to claw away Kane’s stinging strike at goal.

Half-an-hour had passed, and counterpart Jordan Pickford in the Three Lions’ net hadn’t yet been called into action, but that would soon change as Tomáš Holeš unleashed a surprising rasping strike from distance.

Everton ‘keeper Pickford got down well to his right and palmed the ball away from danger. West Ham’s Tomáš Souček – with 10 Premier League goals to his name for the Hammers in the previous campaign – then started to cause the Three Lions some issues.

Club teammate turned opponent Declan Rice had to react quickly to block one a shot at goal from close range as the ball fell to Souček from a corner, and soon after, the Czech probably should have equalised on the night in controversial fashion.

Luke Shaw headed a cross into the box away but looked to have been caught by a high foot.

Nothing was given, and when the ball fell to Souček on the edge of the area, his shot left Pickford stood still, watching the ball and hoping it wouldn’t end up in the back of his net. Thankfully for England, it didn’t and went just narrowly wide of the post.

With 10 minutes left until the break, England had been rattled and knew that they needed to regain a foothold in the game, so they started to be more pro-active in midfield, battling harder and running for one another more to see the half through.

Before then, Vaclík pulled off another good save to deny Kane from getting his first goal of not only the game but the entire tournament.

Before kick-off at Wembley, Kane had failed to have a shot on target in the two group games prior.

The Czech keeper once again parried away a powerful strike, and with Sterling in an offside position directly in front of him, England couldn’t add to their goal tally.

Both sides made a change at half-time, with Southgate opting for a mix-up in the midfield. Rice was replaced by Liverpool’s Jordan Henderson, whose last appearance in a friendly against Romania pre-tournament had seen him miss a penalty, having taken the ball off striker Dominic Calvert-Lewin.

It’s fair to say that the second 45 wasn’t exactly action-packed and was more a battle of attrition.

The first real action of any note came on the hour-mark exactly when Pickford was called into action due to some casual defending on the wings.

Vladimír Coufal – also of West Ham – wasn’t closed down out wide and had time to pick out his target with a cross from the right.

Coufal opted to try and find talisman Patrik Schick with a deep cross, but Pickford beat the forward to the ball and punched away from danger.

As expected, with both teams already through into the knockout stages, more changes were made as the game went on from both camps, which were probably more a case of rotation and looking ahead to the future games rather than the final group stage encounter playing out in front of them.

Grealish exited to make way for Jude Bellingham while Sterling – England’s goalscorer on the night and to date only goalscorer in the tournament – was replaced by Rashford.

He was playing his first game in over 40 days, having been injured towards the end of the Premier League campaign with ligament damage which many thought would keep him out of Euro 2020 in its entirety and possibly beyond.

Maguire was involved in an attacking sense on a couple of occasions in the second half, as well as dealing with whatever was thrown at him in defence.

Czech defender Jan Bořil had looked to push Maguire to the ground in the box when the England man took a tumble, but nothing was given by the Portuguese referee.

Shortly after, 28-year-old Maguire surged forward into the final third and played a nice ball through to slip-in youngster Bellingham, but the Borussia Dortmund man was beaten to the ball by a Czech defender, and the chance went begging.

Czech Republic never really posed much of a threat throughout, and it looked like England would be the ones to double their advantage.

In fact, they thought they had shortly before the end through Henderson, but the offside flag denied the midfielder his first-ever goal for the Three Lions.

After a scramble in the box, he finished well from close range, but the ball came off Bellingham’s foot last. Despite a VAR check, the on-field decision stood.

Henderson is one of just seven players to have made over 50 appearances for the national side and not scored a single goal, though he is not renowned for his goalscoring exploits, so this may not come as much of a surprise.

Other than a last gasp shot out of desperation by Czech substitute Alex Král from distance – which went high and wide of England’s goal – this was the last action of the night.

With the full-time whistle, 1-0 on the night and England had leapfrogged their opponents to finish top of Group D.

The result sets up a mouthwatering tie next Tuesday (June 29, 5.00 pm kick-off) back at Wembley where Southgate’s men will come up against the team who finish second in Group F, which is set to conclude tomorrow.

All four teams in that group – France, Germany, Portugal and Hungary – could yet finish second.