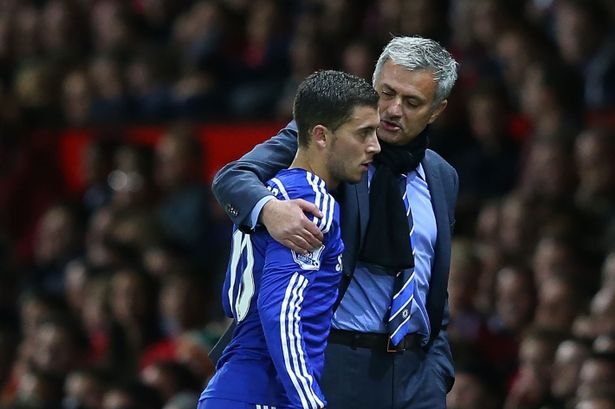 It’s been a constant trend over the years and can be predicted with complete accuracy now. Every time a Premier League club produces a world-class talent, Real Madrid are sure to arrive on the scene. Steve McManaman, David Beckham, Cristiano Ronaldo, Luka Modric, Gareth Bale…the illustrious list says it all.

The Premier League’s brightest talent at the moment is undoubtedly Chelsea’s Eden Hazard. The Belgian winger has been the shining light in a squad laden with talent, and has grown by leaps and bounds in the last couple of seasons. From being a player who everyone admitted had lots of talent and potential, he is now the main man at Chelsea. He is no longer just a player who just hugs the touchline and resorts to a box of tricks; he is at the centre of things, always looking to score or create.

Despite the fact that he has become the darling of Stamford Bridge, there is still the fear among the fans that it won’t be long before Real Madrid come calling.

The Galacticos’ coach, Zinedine Zidane, was full of praise for Hazard in an interview to FIFA.com earlier this week. The Frenchman put the Chelsea player in the same category as Cristiano Ronaldo and Lionel Messi, when asked about the footballers that make him ‘dream’.

Zidane said, “There are players I keep an eye on and who I like a lot, like Lionel Messi and Cristiano Ronaldo, of course. They’re fantastic players, but I like Eden Hazard a lot too.

I enjoy everything he does on the pitch. I like the way he carries himself, that decisive streak in him and the fact that he’s improving every year. He can still get better too, and I think he’s a big reason why Chelsea are on top of the table.”

Even though there is no doubt that Hazard is among the best in the world at the moment, there are reasons to believe that a move away may not be the right decision anytime soon. The Belgian has been nurtured by Jose Mourinho into just the right player for Chelsea. He is tailor-made for this team, and fulfills all the requirements to fit into this particular system.

The defensive side which he has added to his game, including the increased physicality and tracking back, along with the work-rate, means that he has fitted into the Blues’ system perfectly. If he does move to a different club, like Real Madrid, who do not need their wingers to track back as much, he may not be as effective. While it can be argued that lack of defensive responsibility will make Hazard even more lethal going forward, it will take time for him to break the current habit and develop a new one. The 24 year-old is the favourite to win the PFA Player of the Year Award to be announced this Sunday, and at the rate at which he is going, it doesn’t look like the last individual honour he’ll ever win.

For Chelsea, of course, keeping Hazard should be top priority because of the special player that he is. He signed a five-and-a-half year extension with the club in February, a clear indication of the fact that he wants to stay. The £200,000 per week wage obviously contributes a lot to that, but there is also the fact that with the current squad, Chelsea are one of the brightest prospects in Europe in the coming years. This season, they have all but sealed the Premier League trophy, along with winning the Capital One Cup. While the Champions League campaign was a disappointment, it is something that Mourinho will surely address next season. Therefore the future shows a lot of optimism.

While there have been no solid stories of Real Madrid, or anyone else, looking to lure Hazard away from Chelsea, it won’t be long before they do come along. But for the Belgian and the Blues, it is imperative that they hang on to each other. Mourinho has brought out the best in Hazard, and the midfielder has made a huge contribution in making Chelsea the best club in England. Therefore, even when questions are asked in the future, this is an association that should last a lifetime.