Earlier this week, we reported that Liverpool are showing keen interest in highly rated Porto’s attacking midfielder, Juan Fernando Quintero, who is also a reported target of Manchester United and Real Madrid.

Quintero is a 21-year-old Colombian attacking midfielder who has been touted as one of the most promising talents in world football.

Having impressed at the youth level in the Colombian National team and club football in South America, this has been his first full season in Europe, in Portugal at Porto. 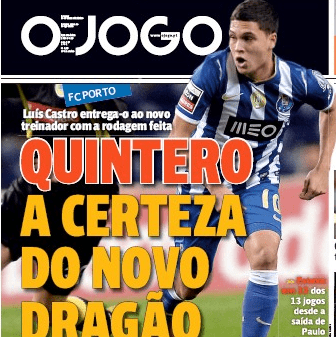 Despite a far from brilliant start to the season, mostly explained by the time he took to adapt to European football and a totally new life, Quintero’s importance at Porto has been more and more apparent, especially under new manager Luis Castro.

He’s arguably the best creative midfielder in the Portuguese League, although he’s not quite the finished product as well and has plenty of room to improve – especially as far as his decision making is concerned.

He has often been compared to Lionel Messi due to his dribbling ability and vision, and is expected to play a key role for Colombia in this summer’s World Cup in Brazil.

His performances have attracted the interested of many of Europe’s financial powerhouses, such as Real Madrid, PSG, Barcelona and Juventus. So far, no concrete offers have been reported, with the player’s buyout clause of €40 million probably requiring further observation of his play before making a move. Porto are known to be tough negotiators and rarely sell their pearls below their buyout clauses.

Liverpool have secured the qualification for the Champions League next season and top players are expected to arrive, with managing director Ian Ayre claiming that Liverpool will go to any extent to buy a player, if he is wanted by the manager.

Well, as I said, Quintero is far from a finished product but under the tutelage of Brendan Rodgers, he could be one of the bests in the world. He is that talented. The problem lies in difficulty while negotiating with Porto. Can Liverpool show the ambition and sign him in summer?